Tip of the Day: If you are planning a Pacifc Northwest vacation, don't skip Vancouver. The views from Grouse Mountain and Stanley Park? Amazing. 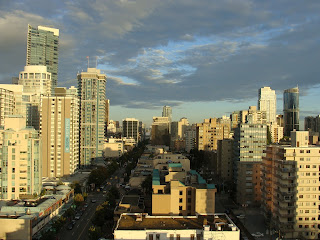 Vancouver, BC
While visiting Vancouver, Seattle, and Portland, I did and saw and ate many fabulous things, but for the purpose of this blog I shall narrow it down to kidlitish stuff. So, to focus, a list!
1. Read SAVE THE CAT: The Last Book On Screenwriting You'll Ever Need by Blake Snyder. I heard of this book for the first time when Jessica Brody talked about it at Rochester Teen Book Festival this past May. I'm so glad I finally picked it up -- something about it TOTALLY CLICKED in my brain! I love the 15-beat scheme! And his tricks for nailing a logline! Wow. I got off the plane with 3 pages of novel notes for my MG that is nearing submission and an MG that is in rewrites, and a reason to return home to write after vacation. 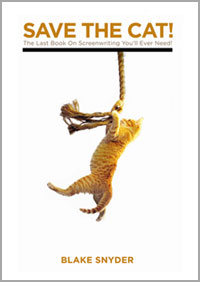 2. Went to Powell's Bookstore. Twice. And bought eight books. Including SAVE THE CAT because I'd read a library copy on the flight there. Yes, it is the best bookstore EVER! It was also SO BUSY and awesome to see tons of people buying books!

3. Read two YA novels on my Nook and learned that I will skim a book very quickly on it if I would otherwise stop reading a paper version of the book. I'm not sure what this says about my reading habits, but I am glad I finished the two books I may have given up on otherwise.

What did you do this past week? 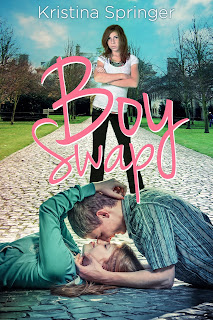 Boy Swap: The secret to sisterly love and scholarly bliss.

Research shows that seven out of ten girl fights are over a guy. The Boy Swap Club fixes all that. In an effort to spread around male cuteness and minimize fights and backstabbing, they just share boyfriends. And Brooke Thomas, consummate band member, has been asked to join the super secret club because the president of the club has the hots for her guy.

Brooke doesn’t want to share her boyfriend. I mean, who does? But how can she say no? She, a second chair flutist in the school band, finds herself sitting between the Varsity Cheerleader Captain and the Homecoming Queen at the first meeting. Her friends will never believe this in a million years.  Too bad she can’t tell them. But she knows. This one event can change her entire life. What if she becomes actual friends with one of these girls? It might be worth sharing her boyfriend.

Email ThisBlogThis!Share to TwitterShare to FacebookShare to Pinterest
Labels: Boy Swap, humorous YA, Kristina Springer, YA

*with apologies to The Buggles

Tip of the Day: Trader Joe's Dark Chocolate Covered Mini Pretzles are dangerously delish. (9 servings per bag? How about 4?)

As A2A readers undoubetly know, a few years ago book trailers for YA and MG novels started becoming more popular. Many discussion cropped up on if they were worth having.

Personally, I watch trailers that:

a. get a lot of buzz,
b. are by authors I know, or
c. are for books I'm planning on buying/reading anyway.

In other words, I have never been swayed to buy/read a novel because of the trailer even though I have been entertained by them.

One of the first trailers I remember thinking was cool was this one for Carrie Ryan's THE FOREST OF HANDS AND TEETH:
http://www.youtube.com/watch?v=mUi3Ap2ga1U
But because it has actors and spoken dialog, it feels more like a movie trailer than one for a novel.

A recent favorite is this amazing animated trailer for THE SCHOOL FOR GOOD AND EVIL by Soman Chainani:
http://www.youtube.com/watch?v=eqnU3ZqvL1k
It is also very cinematic, and way too expensive for a novice like me to ever do.

When I decided to self epub BLACKOUT, I didn't originally plan to produce a book trailer. But my husband was writing new tracks for his band Blue Falcon around the time I was formatting my novel and I thought it would be cool if he created original music for a trailer. Once he agreed, I was excited!

While I enjoy some of the cinematic book trailers out there, I wanted mine to be more in line with the experience of reading a book. I also knew I needed it to be about 45-60 seconds long. I watched Lisa Schroeder's trailer for THE DAY BEFORE for inspiration as well: http://www.youtube.com/watch?v=kBnbubgIMJA

I love the filming that Lisa did for her trailer, but that is more work than I wanted to put into it so I went with the photo that was used for the cover as a backdrop for the whole thing. The rest was my husband using the limited options on iMovie.

But honestly the best part of having a book trailer? I can hock my wares by giving people an experience -- a free taste of music and atmosphere for BLACKOUT -- instead of just a link where they can buy my book. As someone who is not into self-promotion, it makes talking about my novel a lot easier.

I don't expect my trailer to be the one that transforms people like me into those who buy books based on them. But if the music and atmosphere at least entertains those who click on the YouTube link for 60 seconds, I've done my job.

What are your thoughts of book trailers as a viewer or as an author?

It's like a game of hide-and-seek. Where's Megg? Why does she keep popping up and then seemingly disappearing?

If you're on Facebook with me, you know a bit about what's been going on in my real life, yanno, the one I live when I'm not writing.

September 2012 - the toilet in my kids' bathroom overflows, causing MAJOR damage in my house. We're talking months of construction. Oh, and we also had to pick up our new puppy. Great timing. I spent the next three months basically living in the basement as our house was being reconstructed. Who knew a toilet could do so much damage?

January 2013 - My hubby, who has a history of back problems and one spinal surgery already under his belt, re-injures his back. Weeks of therapy didn't help. He ended up in the hospital for a double spinal fusion. It wasn't that simple, though. Due to the pain medication he was on, he couldn't drive for almost two months. My life was turned upside down as I played the role of single mom and caregiver (no complaints, just the facts).

This lasted through March. I had about 60 days of quiet where I published Shucked, a contemporary YA novel I'd had bouncing around my head for years (it's a miracle I got any writing done during the time).

May 2013 - We got some news about our kids' private school that caused us to put our house on the market so we could get into a better public school district. Anyone who's tried to sell a house in this market knows how stressful that can be. And the CLEANING, OMG, I had to make the house we'd built and lived in for 11 years look like something out of a magazine.

The house sold. The first day. For cash. But we had to be out in two weeks. TWO WEEKS. Oh yeah, and the hubby was still in recovery from back surgery so it was up to me to pack everything by myself. Did I mention I had only two weeks?

From June 10th - July 5th we were basically homeless. On the weekends we lived with my parents an hour away and during the week we lived in hotels near my hubby's job and my daughter's swim team. My computer was in storage and, really, who can write on an iPad in a hotel with two stir-crazy kids? Not me.

Here I am, August 7th, the house is 90% put together. I (finally) find myself with time and the mental capacity to sit down and write. Five days of drafting and I've written 6,709 words. I know my output will at least double when the kids go back to school. The story is flowing and I'm letting my imagination run wild. It's an exciting time.

The next ebook is a high fantasy, similar to the others I've published, but this one is an adult fantasy, not YA. That means a little more sex, a little more violence, and no love triangles. lol

I feel like I'm making a comeback. I was never totally gone, but, to be honest, I haven't been as committed to work as I should have been for almost *shudders* a year. I can't believe it's been that long.

So here's the good news. The SCBWI-Illinois reps have asked me to be the regular self-publishing columnist for the Prairie Wind. I'm really excited!!!

To celebrate, I'm giving away one of my ebooks to anyone who is signed up for my newsletter by August 21st. All the details will be in the newsletter I send out, so if there's a book of mine you haven't read yet, sign up!

Thanks to all of my fans for sticking by me over the last 11 months. My life has been a roller coaster, but knowing I had all of you waiting on the other end was a big motivator to never give up on my writing career!!!!!