Tip of the day: You can read an interview with my fantastic editor from Simon Pulse, Michael del Rosario, HERE.
Wow, it’s the middle of January already. And that means it’s almost January 17th, the day of my book signing at Powell’s books. You may recall I also did a book signing last year on the third weekend of January. Here's a picture of that event: 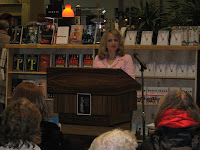 So how’s it feel to be doing it again a year later? Still exciting and yes, still scary. I’m sure it will be fine. I’ve prepared a little talk to do before I actually sign, so I’m not worried about that. The hardest thing about signings, I think, is that you just so desperately want people to SHOW UP. And by people I mean people other than your immediate family and best friends.
I’ve been to Powell’s when the room is packed to see a speaker, and it’s so wonderful to see all of those people there to hear an author talk. I’ll be happy if five people come who aren’t there because I twisted their arm.

Since I don’t do many book signings, simply because I don’t have a lot of time with the day job, I tried to get the word out as best I could for this one. Here are some of the things I did:

~ I made up a flyer and sent it via e-mail, as an attachment, to teachers, librarians and other people I know, and asked them to forward to any people they know who might be interested, or to post it if they thought their students might be interested.

~ I sent a less formal e-mail to my book club friends and asked them to forward to any teens or teachers/parents/librarians of teens.

~ I sent postcards I have with my two book covers on the front and put the book signing info on the back and sent it to some Language Arts teachers in town.

~ I put a status update on my facebook page.

~ I sent out a notice to the Oregon SCBWI listserve.

~ I contacted the local newspaper and asked them to list the event. I know the larger Portland Oregonian also put the event in their Sunday living section.

So, with all of that, it’ll be interesting to see how many people show up. Want to guess? Then I’ll tell you next week who was closest.

~Lisa, Miss Crafting a Career
Posted by Lisa Schroeder at 6:00 AM

I am so bad at guessing games. Like, I always pick the SLOWEST line at the grocery store checkout. But I'm impressed with all your self-promo you did! So I'll guess a total of....53. GOOD LUCK!!!!

Have fun at the signing Lisa. I hope you get good weather for it. FAR FROM YOU is a great book and now you have 2 books with teen fans, so I'm sure it will be a great time.

Wow, I hope you get lots of people to come Lisa. You did do alot of work promoting it to librarians and teachers. Good for you.

Definitely let us know how it turns out. And have fun!

Go you! I'm impressed at all the work you've put into this event. I'm sure you'll be a star. Can't wait to hear all about it.