JYAP Release Around the Corner!

Tip of the Day: The Espressologist is bargain priced at $3.60 right now! Check it out! Also, My Fake Boyfriend is Better Than Yours was just nominated for a 2012 YALSA Quick Pick! Whoo hoo!
It's a crazy week for me as I'm getting ready to leave for a writing retreat (YAY!) and trying to fill out a million interviews in preparation for the release of JUST YOUR AVERAGE PRINCESS on Tuesday! So excited! So today I'll just post a summary of the book and I hope that you'll check it out-- it's a perfect read for the fall! 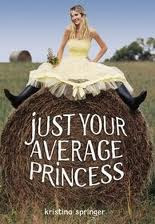 Jamie Edwards has loved everything about growing up on a pumpkin patch, but ever since her cousin Milan Woods arrived, things have really stunk. Jamie can’t imagine it was easy for Milan to leave her life back in Los Angeles and move to Average, Illinois, population one thousand. But it’s kind of hard to feel sorry for her since (a) Milan’s drop-dead gorgeous; (b) she’s the daughter of two of Hollywood’s hottest film stars; (c) she’s captured the attention of everyone in town, including Danny, Jamie’s crush since forever; and (d) she’s about to steal the title of Pumpkin Princess right out from underneath Jamie!

Posted by Kristina Springer at 7:59 AM

Congratulations Tina! I can't wait for launch week next week!

I can hardly wait to read your newest creation, Tina. Your characters are so real that they jump off the page. I'm sure that Just Your Average Princess will be a winner!