Who Is That Masked Man? (or What Movies Do for Book Characters)

Tip of the Day: The Greater Rochester Teen Read during Teen Read Week with A. S. King was amazing! Thanks to all the teachers, librarians, teens, and Amy(!) for making it a success! You can also check out a new interview with me in the YALSA blog for winning the YALSA/Dollar General TRW grant.

Some might say that movies/TV shows based on books are not as good as the written versions. In many cases I agree with that.

However, as Halloween approaches and costumed enthusiasts make their party appearances, it is clear that without Hollywood making our book characters visually concrete in our heads, many a costume would go unrecognized -- or unimagined. 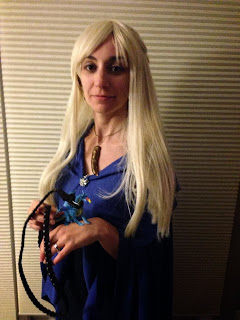 Can you tell who this character is?
How many people dressed as Katniss before THE HUNGER GAMES became a movie? How about Legalos? Or Deanerys Targaryen? :)
How often do you think a movie that flops hurts the book it was based on? If potential readers see the movie first and then don't even try the book?
Deena, Miss Subbing for Pubbing
﻿
Posted by DeenaML at 8:08 AM

I think that if a movie flops, most people don't even see it. So it probably doesn't hurt the book. And even people who didn't see the movie, but recognize the book's title as having been a movie, might pick the book up.

I've been reading Matt Kahn's list of bestsellers from the past 100 years, and it seems clear that many of the books that stick around in our public consciousness have been helped by movies.

I'll have to check out MK's list! And good point about flop films not even being on people's radars.