Don't Give Up: Do the Math

Tip of the Day: Barnes and Noble is changing their return policy. Be sure to ask for gift receipts.

I’ve been reading The Drunkard’s Walk: How Randomness Rules Our Lives by Leonard Mlodinow. Yes, a nonfiction book on math. I’ve really been reading it, although I’ve been skimming over the math big time. The concept of the book is fascinating—the idea is that more of our lives consist of random events than our brains can accept. We’re configured to see patterns in things even when they don’t exist. For example, when rats and humans are shown a random series of flashing red and green lights and are asked to predict which color will flash next, rats score better, simply by “guessing” the same color every time. Humans try to figure out what comes next, refusing to believe that they can’t.

What does this have to do with writing? A lot. To quote the book:

“There exists a vast gulf of randomness and uncertainty between the creation of a great novel—or piece of jewelry or chocolate-chip cookie—and the presence of huge stacks of that novel—or jewelry or bags of cookies—at the front of thousands of retail outlets. That’s why successful people in every field are almost universally members of a certain set—the set of people who don’t give up.”

Mlodinow tells the story of two physicists, each working on obscure theories. One poured his career into developing string theory, the other toiled away on S-matrix theory. After a decade, the first physicist made a technical breakthrough, and now 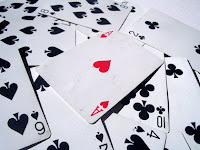 string theory is universally accepted. The second physicist did not make a similar breakthough, and nobody’s ever heard of S-matrix theory. Does that mean the second physicist was less brilliant or talented than the first? Mlodinow explains this well, I think:
“The cord that tethers ability to success is both loose and elastic. It is easy to see fine qualities in successful books or to see unpublished manuscripts … or people struggling in any field as somehow lacking. … But ability does not guarantee achievement, nor is achievement proportional to ability. And so it is
important to always keep in mind the other term in the equation—the role of chance.”

From the book: “ … since chance does play a role, one important factor in success is under our control: the number of at bats, the number of chances taken, the number of opportunities seized. For even a coin weighted toward failure will sometimes land on success. Or as the IBM pioneer Thomas Watson said, ‘If you want to succeed, double your failure rate.’”

So if you’ve heard “Don’t give up” so many times it no longer has meaning to you, I recommend you read this book. The cold, hard numbers prove that it’s the number of at-bats that determines success. It’s the part of your career you have the most control over. Now get to your keyboard and increase your chances!

-- Kate, Miss Apprentice Writer
Posted by Kate Fall at 5:02 AM

And so, that book says what I've been saying for years.

Sling enough spaghetti at the ceiling, and some of it is bound to stick! :)

Ha, I love the way you put that, Lisa! Yes, that's what the book says, except with bell curves.