How Could My Town Ban a Book?!

Tip of the Day: The last week in September is Banned Books Week. I love the ALA slogan: Free People Read Freely.
In April 2006, Alex Sanchez, YA writer, came to Rochester for our annual Teen Book Festival. Just a few months later, my suburb of Rochester removed Sanchez's Rainbow Boys from their summer reading list because of one complaint from one parent.
Soon, Webster NY was all over the news. My little town! Now known throughout the country as the place where they ban books! I was mortified. 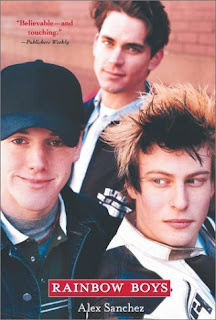 My first thought was: we just invited him here! Doesn't anyone realize that? Talking to people throughout the community, it seemed they didn't. Whenever a parent asked me what I thought about the censored reading list, I'd bring up the fact that we just hosted him to talk about his books. And people would say "Oh really?" It drove me nuts. I mean, how could my town look stupider? "Let's invite someone here and then ban his books!"
I suppose I should be happy that the people censoring reading lists aren't that bright. But this is my town. This wasn't something happening somewhere else, in some backwards valley where they ban books and have never heard of the Flying Spaghetti Monster. This was my tax dollars at work.
Alex Sanchez's website has a great page dedicated to the Webster controversy at http://www.alexsanchez.com/Banned_Books/banned_book_1.html. It has the Rochester newspaper articles and statements from the Webster Superintendent, including this gem, from after Rainbow Boys was reinstated to the reading list: "One of the most significant changes ... is the assurance that every book on the middle and high school reading lists have been read by one of the committee members ..."
Oh, there's a genius idea! Let's actually read a book before we decide to censor it. What a revolutionary concept. I have to add that the summer reading program asks middle and high school students to read and write reports on 2 books over the summer. Well, students, now you know the secret! The people who are grading your reports have never read the books! Feel free to make up anything you want.
So, yeah, this one's embarrassing on so many levels. Complaints from students and other Websterites put Rainbow Boys back on the 2007 reading list. Alex Sanchez came back for the 2008 Rochester Teen Book Festival, so I hope all is forgiven. But it's a sad, sad day when your own town makes the news for attempting to keep a book away from teenagers. I hope nobody judged my whole town for the actions of the school board but, hey, they probably did.
I swear, Webster has a fantastic library system. You'd like it here, you really would.
*Sigh.* Has anyone else experienced their own town in a book banning controversy?
-- Kate, Miss Apprentice Writer
Posted by Kate Fall at 4:58 AM

I was embarrassed, too, and it wasn't even my town. I was so glad Alex came back -- and then actually gave a talk at the Webster Library in 08. Thank goodness he is more openminded than those who removed his book from the list....

Great post about banned books close to your home, Kate. Glad they lifted the banning and actually started to read the books. I guess that's a good thing that came out of it.

Love this post! That's SO insane--it just makes me angry!!

I work as a school library media specialist in a K-6 district. We recently had a parent of a student complain about: 1. Anne of Green Gables 2. The BFG. She wanted them removed not only from her daughter's school library but from every library in our district. Why? Because her daughter is adopted and she's "traumatized" by these stories of orphans. We pointed out that if we were to remove every story about orphans it would constitute a big portion of our collection. Books like Heidi, A Series of Unfortunate Events, The Boxcar Children and Harry Potter would need to be removed. The district canceled the meeting with the parent. Yay!

Yikes! As far as I know, we haven't managed to go so far as to invite the author to speak and then ban his book! School administrators are so terrified to actually think before they respond to the panic-driven ignorance of parents (or government regulators--thanks for the NCLB crap!).

Come on, guys! Get some backbone and brains! I don't know how many time parents complained about something I did in class and they had never actually read the book or seen the movie. Crazy!

Careful, people. We might actually ask our children to think!

You must be sexually excited for Generic Viagra to work. If you take Generic Viagra UK and are not sexually stimulated, you will not get an erection. Generic blue pill is not a hormone. It is also not an hrodisiac. It's a prescription medicine that gives men with ED harder erections so they can enjoy a better sex life.