I Am A Blushing Fool But Not Over Male Penguins (or M. T. Anderson Rocked My Writer's Group)

Tip of the Day: Celebrate Banned Book Week! Read my rant on the would be banners here.

Kate learned that last Tuesday a YA star would be in our midsts here in Rochester. M. T. Anderson!!! Not only was he here to read at the local community college, but also to answer questions and sign books -- all for free! So our Writer's Group had a field trip to see him. Yay Kate! Yay Writer's Group!

Mr. Anderson was humble (after his reading and before the Q&A said, "If you're bored, you can leave now." I am pleased to say not even the most exhausted of college students left), hilarious (CP Maureen had to leave right after his talk, so I got her book signed for her and he wrote, "To Maureen -- Who I've never met. Where were you?"), smart (he took 6 years to write the two Octavian books to make sure the historical aspects and voice were just right), and a great reader (he read from FEED and OCTAVIAN Vol. 1).

I must admit that according to my CPs, I blushed upon seeing him standing casually in the college hall like he was a regular person instead of a Writer God. 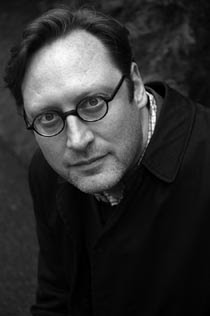 It is always interesting to hear writers read their own work; it's like all of a sudden you can hear what was going through their head -- the voices they were hearing -- as they wrote. I will never read Chapter 1 of FEED the same again (it will now always be better and funnier!).

Because I've already rambled on too long here, I'll condense my last points in a list.

1) When a 20-something student asked, "Why write YA?" he said that the stories of self- and world-discovery could only have been told through the eyes of teens.
2) It was super cool that college classes have YA novels assigned as their reading.
3) Mr. Anderson likes to capture the language of a different time and place.
4) The questions the college students asked were, um, way above my level of cognition at 8 PM on a Tuesday night.
5) I managed to resist bringing all of his books that my library own to have them autographed.
6) FEED has been challenged by over-protective, mal-informed, closed-minded parents. Read it.

Deena, Miss Recently Repped
Posted by DeenaML at 4:05 AM

Oh my on M.T.Anderson! I've read most everything he wrote, and have listened to first book of Octavian Nothing-just kept shaking my head at how good he is at crafting words into a story. As for Feed--heh, you bet, I'll read it again, and oddly enough I've been recomemmding it to teens who need to read a sci fic book for Language Arts.

And, Thirsty...those last few lines of the book still give me chills. Loved it!

I'm so glad I got a chance to see him in person, and he was very funny. Go see him if you can!

I am so ashamed to say I have not read FEED. Can you believe it?

I must get it and read it soon!!

Sounds like a great visit. I had to read Feed for one of my classes, and it was definitely one of the most thought-provoking books I've ever read.