Tip of the Day: Check out this list of 20 Favorite Romantic Comedy Actors Under 40.

We need to talk. What's going on with the romantic comedies for teens? Like, where did they go? Have you stopped making them? Please say you haven't stopped making them. You have, haven't you. A quick search on Amazon for the Simon Pulse Romantic Comedy line and I don't see any released past Spring of 2011. What's going on? They're so darn cute and funny. Come on, you guys love them right?

I know we have had this dark thing going on for some time now at the book stores. And it was fine for awhile, but we need some diversity guys. Teens keep asking me what happened to all the light and funny books. I know there still are some but we need more in the mass paperback kinda way. And it's not just you-- they're doing it on TV too. Everything is so dark and dreary. Maybe that's why I keep watching reruns of Gilmore Girls every weekend.

So here's what I'm thinking publishing industry. There's all this back and forth on the Internet everyday about book prices, printed books going away, the rise of ebooks, people not wanting to pay an arm and a leg for books etc. I know you've seen it because I see it on twitter a dozen times a day. So listen, why don't you come up with a super affordable mass paperback line. You know, like in the olden days when I was a teen: 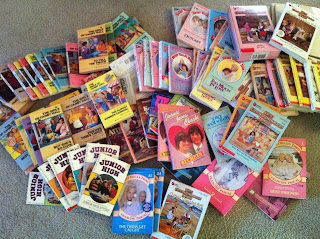 Did I really just say olden days? I swear I'm not that old. But this is my collection from the late 80s/early 90s and back then I paid $2.99 a book. Total deal and I had no problem buying tons as you can see. Sometimes I would buy a book everyday, go home and read it, then get another the next day. Do teens do that now? Doubt it. Who's got the cash for that? I'm not suggesting you price yours at $2.99 but I'm thinking the magic price point should be $4.99. Think about it, $4.99 for a smaller mass paperback and I get to have the book in my hand. I can pass it around to my friends or take it the beach and not worry about it because it's not a $15-$20 hardcover or even a $10 paperback. And let's get real, isn't that what a huge problem in the industry is right now? That we're asking teens to spend $10-$20 on a new book? And yes, they'll do it if it's something that they MUST have right away like Hunger Games. But every book can't be Hunger Games. How often do we hear I'll check that out at the library or I'll wait for the paperback?

Think about it, $4.99. Half the price of a traditionally published eBook or trade paperback, a little more than an indie published eBook. I know what you're saying right now, but look at the ro com line at the top-- people weren't buying enough of those (I'm guessing that's why it went away, right?) but those were $6.99 and up. $6.99, though only $2 more than $4.99, is not quite an impulse buy as $4.99. $4.99 is less than my Starbucks. And don't say the printing will cost too much because Scholastic Book Fairs are able to charge that much for many of their books. I'm sure you could make it happen.

Anyway, just think about it publishing industry. You don't have to get back to me right away. But I do think it could work. We could even call it retro and say we're bringing back the 80s. We all know that works in fashion (hello leg warmers and french rolled jeans, how've you been?).

Kristina, Miss Author in Action
Posted by Kristina Springer at 5:00 AM

I'm all for bringing back the 80s so that sounds good to me, Kristina. I totally agree that we need more diversity on shelves. It's absurd the way publishers seem to go all-in for a trend these days.

Jennifer Echols was talking about this and technically her newest release, The One That I Want, is part of the RomCom line. They're redesigning and repackaging them, but unfortunately they are making them $10 instead of the $7 they used to be.