Tip of the Day: Check out the Unread Reader's My Book Boyfriend giveaway! 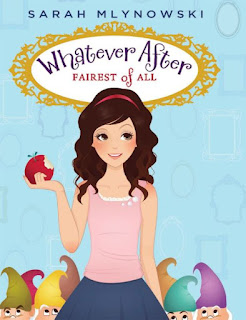 Sarah Mlynowski's Whatever After, Fairest of All. First of all, I adore Sarah Mlynowski's books. She had me with her Bras & Broomsticks series. So of course I was drawn to her newest. Here's a summary from Amazon:

"A fresh, modern spin on a classic fairy tale--from bestselling author Sarah Mlynowski!Mirror, mirror, on the basement wall . . .Once upon a time my brother and I were normal kids. The next minute? The mirror in our basement slurped us up and magically transported us inside Snow White's fairy tale.I know it sounds crazy, but it's true.But hey -- we're heroes! We stopped Snow White from eating the poisoned apple. Hooray! Or not. If Snow White doesn't die, she won't get to meet her prince. And then she won't get her happy ending. Oops.Now it's up to us to:- Avoid getting poisoned- Sneak into a castle- Fix Snow White's storyAnd then, fingers crossed, find our way home." 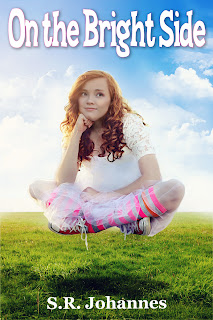 I'm also especially drawn to S.R. Johannes' On the Bright Side. The cover grabbed me right away (background on how her cover was designed here) and then when I read the summary I was hooked. This one is waiting for me on my iPad right now. I started it last night and so far, so cute. Here's a summary from Amazon:

"On the Bright Side is a hilarious road to guardian angeldom paved with so much drama and due-paying that it makes middle school look painless.As if the devil’s food cake at her wake and the white fat pants she’s stuck wearing for eternity weren’t bad enough, fourteen year-old Gabby is quick to discover that Cirrus, the main rung of Heaven, is a far cry from the Pearly Gates. Here, Skyphones and InnerNets are all the rage. Until Gabby finds out she has to protect Angela, her school nemesis, in order to move up through the training levels of heaven. Problem is, Angela is now hitting on Gabby's should-have-been boyfriend. (awkward!)Instead of protecting Angela, Gabby pranks her (like tripping is a sin?) at the hopes of cooling off the new couple. At first, they seem harmless until the school dance sabotage gets completely out of control. Then, her Celestial Sky Agent, who happens to have anger management issues of his own, puts Gabby on probation, threatening her eternal future. Determined to right her wrongs, Gabby steals an ancient artifact that allows her to return to Earth for just one day. Without knowing, she kicks off a series of events and learns what can happen when you hate someone to death." 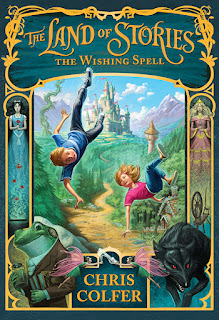 The Land of Stories, The Wishing Spell by Chris Colfer is the last book that grabbed my attention. And not because it's written by Kurt from Glee. Or because of the cover because while it is interesting, it isn't the type of cover that usually stops me in my tracks. And not because of the summary on Amazon (but I'll share it anyway) because really it's pretty meh:

"Alex and Conner Bailey's world is about to change, in this fast-paced adventure that uniquely combines our modern day world with the enchanting realm of classic fairy tales.
The Land of Stories tells the tale of twins Alex and Conner. Through the mysterious powers of a cherished book of stories, they leave their world behind and find themselves in a foreign land full of wonder and magic where they come face-to-face with the fairy tale characters they grew up reading about. But after a series of encounters with witches, wolves, goblins, and trolls alike, getting back home is going to be harder than they thought."

This book grabbed my attention because I heard Chris talking about it when he appeared on Windy City Live and he made it sound so interesting. He talked about how he got the idea and how after he read fairy tales as a kid he was always left with so many questions. Like, how was Cinderella's wedding? What happened in the years following? Why are there a couple of princesses (Snow White and Cinderella I believe) married to "Prince Charming"? And are they brothers? He said his book addresses things like this and that made it sound really cool.

I hope you guys check out these books and I'll keep my eye out for more great middle grade to share with you!

Kristina, Miss Author in Action
Posted by Kristina Springer at 5:00 AM

Email ThisBlogThis!Share to TwitterShare to FacebookShare to Pinterest
Labels: book recommendations, Chris Colfer, giveaway, Middle Grade, On the Bright Side, S.R. Johannes, Sarah Mlynowski, The Land of Stories, The Unread Reader, Whatever After, Windy City Live

I go on MG kicks, too! Good blog post idea since I'm revising my historical MG as well....