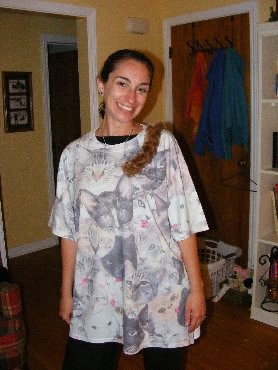 Deena, Miss Subbing for Pubbing
Posted by DeenaML at 8:45 PM

Just this week, I found a cryptic note inside one of my library books!

But nothing as great as that shirt! Books and cats do go together, sort of. (And no, I wasn't the one who donated it.)

Looking forward to other things found. I love the shirt!!

Jennifer -- the cryptic notes do have their place! I have a stockpile that I can't wait to feature...

Joanne -- thanks for reading! Miss you Bally's ladies!