Shedding Some Light on Foreign Rights

Tip of the Day: So cool! Mrs. Magoo did a cute video review of THE ESPRESSOLOGIST and is giving away SIX copies of the book. WOW. Nice huh?! Go show her some love and enter her contest!

I want to preface this entry by saying that I’m not an expert on foreign rights. Not a bit. Well, I know a smidge. But maybe that smidge is more than others know so I’ll share. From what I have seen it goes like this—you sell your book to a traditional publisher and when you sell you either sell them (a) English rights or (b) world rights.

If you sell (a) English rights then your publisher can publish your book wherever English books are sold. And the foreign rights are yours to sell. Typically this is done through the foreign rights department at your literary agency and foreign co-agents. For me, my literary agency has sold German and Japanese rights for The Espressologist. Hopefully we’ll sell more in the future. Foreign rights tend to sell after the book is released but sometimes will sell early (like if you’re getting some crazy good buzz).

If you sell your publisher (b) world rights then the publisher is responsible for selling your foreign rights and will just let you know where they’ve been sold.

Which is better? Who knows. Some say (a) because then you are making additional sales and getting checks (advance and then later royalty) directly from these other foreign publishers. Some say (b) because you don’t have to think about it and it goes toward your advance so you’ll earn out faster.

What do you guys think?

And then what happens AFTER you sell your foreign rights? Do you ever talk to the publisher or work on the book with them like you do with your American publisher? This is the kind of thing I wondered about all the time before my German book came out. And you know what? In my experience, nothing happens on my side. One day the book showed up online and google alerts told me about it. Basically, your agent or publisher (whoever sells the rights) just sends the foreign publisher a copy of the finished manuscript. They translate it, pick a cover, market it how they’d like and put it on sale. And then send you pretty finished copies of the book like so: 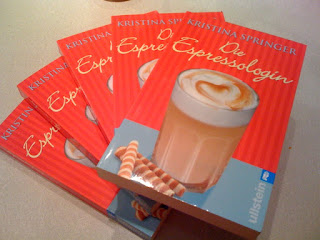 So, that’s what I know about foreign rights. Anyone have anything to add?

Posted by Kristina Springer at 5:32 AM

This does shed some light on foreign rights, as you know way more than I did about it. Thanks for the info.

Great rundown, Kristina. There's also another option: selling only North American rights. Then your agent can sell the English rights for the UK, Australia, etc. separately.

As for which is best, all I know is that my agent likes to keep as many rights as possible so she and her agency can make the most possible money for their clients (and themselves, obviously ;-).

We sold my first foreign rights last year to Brazil and Germany. So far my only direct contact has been my German translator stopping by my blog to say hello--I was thrilled silly!

I've heard of some authors working with their other English-speaking pubs to come up with valid "translations" when a slang term has a totally different meaning across the ocean. Very interesting!

A replica handbags , not only replica louis vuitton reflects your high sense of fashion, but also louis vuitton bags represents your status, confidence and prestige. For many people who have a budget, a lv could be a cost-prohibitive order.