What we can learn from David Cook

Tip of the Day: When you get bookmarks made to promote your book, remember to keep the front simple and pretty, so people are more likely to keep it. Use the back to put the necessary information about yourself and your book.

Have you been watching American Idol?

Come on, it's okay, you can admit it.

I watched for awhile, and then I lost interest. I didn't watch for a few weeks. And then, on the radio one morning, they were talking about one of the contestants and how he did an amazing rendition of the Beatles song, Eleanor Rigby. Fortunately, we still had the Tivo set, so I watched the show, and I was blown away by David Cook. 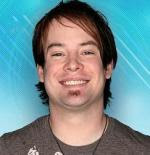 I watched the next week, and liked him a little more.

And then I watched him this week, and when he did the most awesome version of a Michael Jackson song, I became a true blue David Cook fan, and I will tell you right now, I will be absolutely heartbroken if this kid from Missouri doesn't win.

I love that he takes a song and puts a new spin on it. He is unique!
I love that he knows who he is and stays true to that.
And most of all, I love that he is working really hard to make each performance better than the last.

As writers, is there something we can learn from David Cook?

Write something unique. If it's a story similar to one that's been told before, turn it upside down and make it something new and fabulous. Editors don't want the same old, same old. They want something fresh, something great, something that makes the heart beat faster as it's being read, just like my heart beats faster as I watch David Cook perform.

Know who you are as a writer and stay true to that. To me this means - know your strengths and play to those! I think sometimes we admire those writers who are different from us, and then we want to be like them. For example, I love writers who make me laugh. It's such a gift. But I just don't write funny very well. As much as I might like to read it, it's not my strength as a writer.

It's not easy. In fact, it's freaking hard.

But hopefully it will pay off for David Cook.

~Lisa, Miss Pinch Me I'm Pubbed
Posted by Lisa Schroeder at 5:30 AM

Yay, David C's been one of my favorites from day one (so YES of course I watch idol). I really like his voice (but I've always loved the rockers on Idol).

So sorry to rain on the David love fest, but Lisa he actually was just doing covers of another cover when he sang his songs. For example this week he covered Chris Cornell's version of Michael Jackson's song, who gets the credit of switching it all around. But I really don't care. When you have a week to pick a song, you gotta do what you gotta do. So if anything he's really good at picked songs that suit him and his style.

He's still definitely one of my favorites. Especially since he's a word nerd and likes crosswords!

Some ppl SUCK at picking their song, so I agree -- whoever did the actual arrangement, he did it justice and turned it into something noteworthy!

Oh, I am so with you, Lisa! I loved his Eleanor Rigby and look forward to seeing what he does each week.

As for the writing, I'm still trying to find this next story, but I think it has almost found me. It's knocking around somewhere...almost there...

And I do hope it will be something fresh.

Yeah, Em. Gotta love the word nerd in him!

Em - I love that he's willing to take risks and that he picks songs that suits him.

GG - I know what you mean about wanting it to be fresh. I hope you start writing it soon and have fun with it!!