Where does hope come from?

Tip of the day: Have you tried your hand at writing for a magazine? It can be a fun change of pace and if you get a sale, it can really boost your self-confidence.

Waaaay back in the spring of 2003, I was really anxious to feel like a real writer. I'd been writing and submitting picture book manuscripts for a couple of years and had a nice, fat file of rejection letters to show for it. I was in a critique group at the time and some of them were trying their hand at magazine stories. So, I thought, I should try that.

I wrote a couple of short stories and submitted them to Highlights Magazine, but unfortunately, those were also rejected. As I was flipping through one of their magazines one day, I noticed a rebus story, which is a very short story for the younger reader with little pictures next to the nouns. And suddenly, I decided to try one of those.

I tried a few of them actually. And finally, it was one of those rebus stories that became my first ever sale.

This week, that story, called "Where do Cookies Come From?" accompanied by darling illustrations, arrived in my mailbox. It's in the March, 2009 issue of Highlights, six years after I sold it. The two characters in the story are Tina and Grandma. Here, I took a picture to show you: 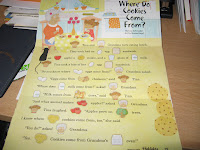 When I pulled the story out and read it six long years later, tears came to my eyes. I think it was a combination of things. A small dream come true. A story about grandma's cookies, which reminded me of my grandmas, both of whom have passed away in the past five years. And yes, the realization that I have come a very long way.

I think it really took me back to those days when I was desperate for a sale. Desperate for validation - for someone to say, you are good at what you do. Keep at it. Keep writing.

Right now, in this economy, it's hard to feel hopeful. Even those of us who are published are worried. Worried we aren't selling enough to keep our publishers wanting more. Worried about contracted books that aren't out yet, and could potentially be dropped if things get worse. Worried the new and upcoming bestselling authors are going to scoot us right off the shelf.

So, today, if Tina and Grandma were having a discussion about where things come from, it might not be cookies they discuss, but perhaps hope. And just like cookies, it can come from a million different places, right?

But, like Grandma's oven, there's one place like no other. Inside your own heart. Now, more than ever, we must write because we love it. Because we can't NOT write. Because stories matter. Maybe they won't be published this year. Or even next. But no matter what, remember, you are good at what you do, and getting better every day.

And hold tight to that hope in your heart. I did. And now I have books, and one little magazine story, to show for it.

Posted by Lisa Schroeder at 6:00 AM

This I really needed to hear this today, so THANK YOU! Very inspirational stuff, and that's so exciting about the magazine. Man that's a long time to wait to see it in print. But so fulfilling to.

BEAUTIFUL post. Thank you so much. That was inspiring. ((hugs))

I can't wait to get my copy of Highlights!! Thanks for the inspiration, Lisa.

Six years? Wow! Talk about patience! I need to go read it in the Children's Center at the lib....

Congrats! My daughter is learning to read and loves those stories ~ will think of you while she reads it to me (again and again and again)!

Thanks, Lisa. Those words and its message really inspire. The "dryspells" are painful waiting periods in our lives. And you are right in saying we should keep on writing. I recently had a mystery short published by Piker Press, an ezine. No pay, but just seeing my work in print gave me a little confidence boost. Thanks again.

Oh, I get Highlights in my library. I'll definitely look for your rebus. Nice post!

Wow! very inspiring. Thanks for sharing such an important moment of your writing career.