Tip of the Day: I just booked my flight for the February New York SCBWI conference. Let me know if you're going!

So last week was a washout here, with schools closed and no internet service. I hope my friends and family on Long Island and New Jersey are recovering. I grew up on Eastern Long Island and my hometown had 92 mile an hour winds! I'm thankful my family is safe and sound. 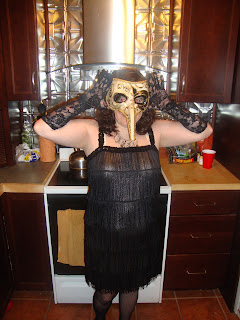 Halloween was rainy because of the storm. Actually it hasn't stopped raining since. But I bought a costume so I wore it. I don't usually dress up at Halloween but I had an idea this year. My daughter was sure I would traumatize the preschoolers down the street as I handed out candy, but all they cared about was the candy. Still, here is my first literary costume. I am one of the permanent inhabitants of the Overlook Hotel from THE SHINING.

Can I just say nobody understood my costume? It didn't help that the weather kept me inside of course. My mother in law said I looked pretty. Noo, I'm supposed to look creepy! Well, I didn't really expect people to say, "Oh, you're from the 1920's party in THE SHINING, I love that novel."

Also, have you seen this movie coming out about THE SHINING? I'm dying to see it! 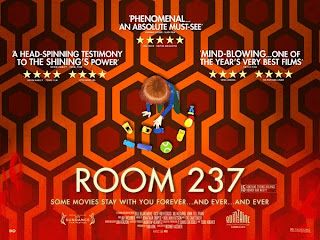 Have you ever dressed up like someone from a book for Halloween? There are three sisters on my street who all came to my door as Hermione. That was adorable. What's your dream literary Halloween costume?

Personally, I'm wearing this one again next year. Hope for better weather.

-- Kate, Miss Perfecting the Pages
Posted by Kate Fall at 9:09 AM

I wore a Princess Leia costume for our book character day at the school this year. The kids sure liked it!