Tip of the Day: if you have a flat roof and are meaning to take care of the ice and snow, make sure to get too it sooner rather than later. Trust me!

Love it when we have A2A the Teen Years, but talking about cars is hard for me. If you asked me to pick a Corvette or a Maserati out of a picture line up, I probably wouldn't be able to. Cars have never really interested me, which is probably why I never viewed driving as a rite of passage. Being the youngest child, my siblings always drove me around and I was perfectly content being chauffeured everywhere.

But eventually I did take driver's training and luckily passed, while only managing to hit the curb a few times while driving the wonderful "Student Driver" cars. After I got my license, my mom handed down an old gray Ford Taurus to me. Since it only lasted a few months before I got into my first and only (to this day) accident, I don’t really consider that car my first car.

It was a rainy day and the roads were slick. Not being that great of a driver, I had no idea what anti-lock brakes were or the fact that my car had none. So when a newspaper delivery woman was delivering papers on the wrong side of the road, it was pretty much inevitable that I reacted too quickly, locked my brakes, and slammed into her vehicle. My car was totaled, but luckily my two friends and I weren’t badly injured.

But trying to explain the accident to the police when they showed up got tricky, especially because we were second to give our statements and the women failed to mention she was on the wrong side of the road. Instead, she tried to blame me since I was young, and said I was driving too fast.

Also, trying to get the police to understand that we were teen girls and all three sat in the front seat (as young girls tended to do when front middle seats used to be more popular back in the day) was hard. They just couldn’t understand where everyone was seated, or whey we would cram in the front seat if the entire back seat was open. We had to keep repeating it over and over.

Luckily, we must have made some sense, since the police didn’t believe the other women’s finger pointing and her company ended up paying all the damages.

As a result, I ended up getting to pick out (kind-of) a used Toyota Corolla with my insurance money. The car already had a good 120,000+ miles on it when I got it, but it still lasted about another 12 years. My husband inherited it later and we just got rid of it last year. It still ran, even though it had its issues. But it was just time for a new car, so we took it to a salvage yard so it's parts could go into other vehicles.

And I’m going to be totally dorky and admit that even not being a car person, I was really sad to say goodbye to my trusted teen car. I had to take pictures to remember the day. Here's my husband ceremonially removing the license plate for the final time. ::Wipe. Wipe:: 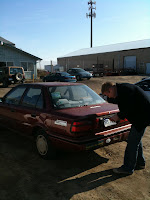 *Note: bumper stickers and dents are all my husband's doing, not my own!

OK, anyone facing the wrong way on the street is always wrong. :)

I can't believe your car lasted that long! I want my Corolla to hit at least 200k miles.