Tip of the Day: Don’t forget to comment here to be entered into our Sarah Dessen giveaway. Lots of awesome books to win, all by one of my favorite authors!

I have to admit that I'm not really on the up-and-up with what's new this year. Luckily someone on goodreads made a list of upcoming YA books. Here's what looks good to me (and I have to say there is an awful lot of supernatural books. It was like trying to play hide and seek to find anything else.):

Abandon by Meg Cabot (April 2011):
Not only am I a sucker for a book with filigree on the cover I also enjoy all of Meg’s books (which should be well documented in this blog). This one I’m particularly excited about, since it’s a supernatural YA. One of my favorite series by her is the Mediator series. This new trilogy sounds similar in tone and appeal and may have even more darkness and edge. Whoo hoo. Plus, it involves the Myth of Persephone. Pretty much sounds like a winner!

What Happened to Goodbye by Sarah Dessen (May 2011):
Continuing on with the theme of some of my favorite authors and delightful book covers, I’m really looking forward to Sarah Dessen’s new book. It also 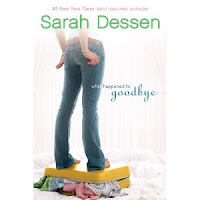 has an adorable cover with an awesome yellow suitcase that I’d love to have a replica of. Sounds like traditional Dessen at its best with the main character finding herself and falling in love along the way. The main character’s name is Mclean, which has to be one of my favorite Dessen names.

Timeless by Alexandra Monir (January 2011):
Since I haven’t really been keeping up with what’s new, I don’t really know much about this book. But it’s about a high school student who discovers a diary that takes her back in time to 1910. Sounds very interesting, involving an old mansion and fam

Babe in Boyland by Jody Gehrman (February 2011):
Mainly looking forward to this book, since the title makes me laugh, and it’s about a girl going undercover at an all-boys boarding school. Sounds interesting.

ean Griswold's Head by Lindsey Leavitt (March 2011):
Love Lindsey’s blog and always thought this book sounded really interesting and funny, with a girl concentrating on a guy’s head to harness her emotions when she discovers her dad has multiple sclerosis. Very excited it’s available soon!

Schroeder and Just Your Average Princess (fall 2011) by Kristina Springer (which doesn't have a finalized cover yet, but I'm super excited to see)! We really do have wonderful talent, past and present, here at A2A. Keep up the good work ladies!

Yay for Sean Griswold's Head!! I read it in manuscript form and it's SO good!

Thanks for the mention too!

Oh yeah, add Sean Griswold's Head to my list, too. And I wasn't sure when Just Your Average Princess comes out, but I can't wait to get my hands on it!

I love Sarah Dessen! Thanks for the list of things to look for. There are so many books I want to read and so little time... :)