How Many People Hate Your Main Character?

Tip of the Day: It's Meet our Agents week at MiGWriters. If you're looking for an agent, you'll want to read these four in-depth agent interviews.

I've been doing a lot of reading lately, and I figured out something about myself. I'm not crazy about books where everyone likes the main character. It's kind of like that quote: "If everybody likes you, you're doing something wrong."

Naturally, your Big Bad Villain will dislike your main character, but is that enough? I don't think so. And what if you're writing about a character who is naturally nice? That's what I'm doing. My main character Kiri has been trained since early childhood to be pleasant and helpful. Nobody has any reason to dislike her. But she finds out that because she was pleasant and helpful, nobody really believed she was smart or capable. Even the people closest to her didn't think she was capable of more. They don't dislike her, but they don't respect her. (If you're a Game of Thrones fan, think of Sansa Stark. She's always polite and she gets no respect, but watch out future!) I'm still worried that she's winning too many people over too soon, but I'll put that question to my critique partners. 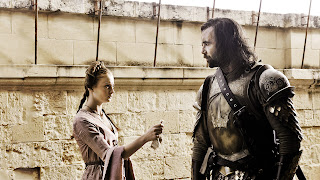 This is also a YMMV (Your Mileage May Vary) opinion. Some people don't mind a book where everyone likes the main character, where she goes through life with everyone going out of their way for her, and of course she acknowledges their kindnesses with gracious, meaningful thanks. If that's you, there are plenty of books out there for you. That's not me, though. I mean, check out my picture. Nobody in the books likes Sansa and the Hound, so of course they're my favorites. They have no friends. They create tension. But they are essentially good people (well. probably good, in the Hound's case).

I love books where people misunderstand the MC's motives, so even though the MC is decent and good, others hate them b/c they think the MC is bad in some way.

Does that make sense? LOL

Stephen King is SO GOOD at that -- making you like ppl bc they are real, not just bc they are totally likable if it was real life.