Tip of the Day: Kindle just announced their Kindle Fire tablet, priced at $199. Looks very iPad-ish. Check it out.

The Anderson's YA conference last weekend was absolutely awesome! I had such a great time. First thing I saw when I got there was that they had my new book for sale! Two weeks early. I was so excited to get to start signing it already. 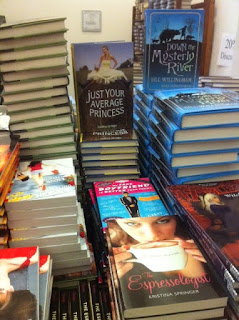 My first panel didn't start until 10 am so following the breakfast I went to see "The Edge" panel. I knew I'd learn a lot since my work is as edgy as a soccer ball.

On the panel were Elizabeth Scott, Sarah Darer Littman, and Jeanine Cummins. 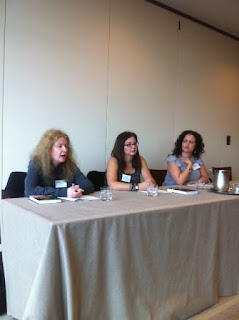 Their books were fascinating and wow, lots of heavy stuff. Kidnapping, murder, rape, internet predators, bulimia...yeah. I kinda wanted to go drink afterward. Just kidding. It really is so different than the light-hearted books I write though. Do you think I'll ever do an edgy book? Hmm. Well, I never
say never.
I also caught the Urban Voices authors talking about their work and reading from their books. 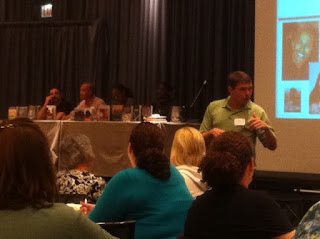 
I participated in two panels (sorry, no pics!) with Franny Billingsly and James Kennedy, called Write Down the Street. We represented the local YA authors in the Chicagoland area. They were a lot of fun and the audience asked great questions. 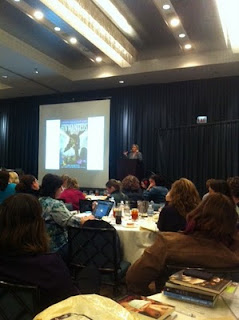 We watched a number of featured speakers. Favorites were Patrick Carmen and the picture of him in one of the priest collared shirts his very catholic mother used to make him (so funny!) and Sharon Draper and her reading the amazing letters she gets from children. I also really enjoyed Lisa McMann (pictured left). Her new book, The Unwanteds looks great!

I had a blast signing books and meeting librarians and teachers. And when it was over I stuck around and stock signed a ton of books (pictured below) for Anderson's. If you're looking for one of my signed books you can go to their web site and order it (or visit if you're local). 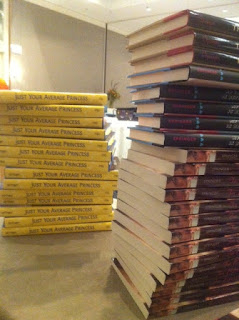 It was a wonderful event and I was thrilled to be a part of it!
Kristina, Miss Author in Action
Posted by Kristina Springer at 7:12 PM

Is James Kennedy not hilarious? And Tony M is such a great speaker. What an awesome conference!

Yes, I was dying throughout the panel-- he's non stop funny!