Tip of the Day: 10 days until The Paparazzi Project comes out! So excited!

I've talked about my obsession with cheesy Hallmark Christmas movies over the years and if you're a fan too you'll have to agree this year is the BEST! For weeks now they've been playing the movies one after another continuously. My DVR is so dang full right now. Happy sigh. :-)

What about Christmas themed-YA though? I've been working on one for awhile and I love it. And hopefully one day people will get to read it. In the mean time, here's a list of some Christmas-themed YA: 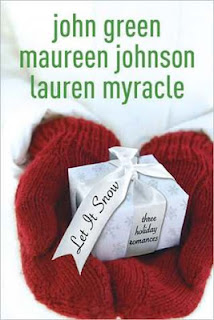 From Goodreads: "Sparkling white snowdrifts, beautiful presents wrapped in ribbons, and multicolored lights glittering in the night through the falling snow. A Christmas Eve snowstorm transforms one small town into a romantic haven, the kind you see only in movies. Well, kinda. After all, a cold and wet hike from a stranded train through the middle of nowhere would not normally end with a delicious kiss from a charming stranger. And no one would think that a trip to the Waffle House through four feet of snow would lead to love with an old friend. Or that the way back to true love begins with a painfully early morning shift at Starbucks. Thanks to three of today’s bestselling teen authors—John Green, Maureen Johnson, and Lauren Myracle—the magic of the holidays shines on these hilarious and charming interconnected tales of love, romance, and breathtaking kisses." 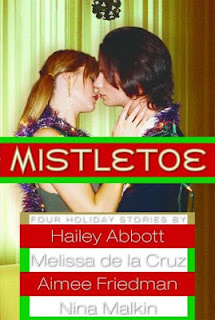 From Goodreads: "Snuggle up beside the fire with this juicy collection of four different, but equally sizzling, winter romances.

Glittering white snowflakes. The handsome blond ski instructor. The sparkle on a cashmere skirt. Hot cocoa and kisses in front of a crackling fire. The holiday season is the ESSENCE of magic...and romance. Four of today's bestselling teen authors -- Melissa de la Cruz (THE AU PAIRS), Aimee Friedman (SOUTH BEACH), Hailey Abbott (SUMMER BOYS), and Nina Malkin (6X) -- bring us delectable tales of love and lust and holiday cheers (and tears) in this one-of-a-kind collection that teens will devour faster than a plate of Christmas cookies." 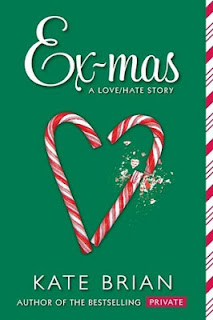 Seventeen-year-old Lila Beckwith's parents just left for vacation, and Lila's all set to throw the holiday party of the season. But when her Christmas-obsessed little brother, Cooper, discovers that global warming is melting the North Pole, he and his best friend, Tyler, take off on a runaway mission to save Santa.
Lila has to get Cooper safely home before her parents get back on Christmas Eve. But the only person who can help her is Tyler's older brother, Beau — a.k.a. Lila's musician, anti-everything ex-boyfriend.

It'll take more than a Christmas miracle for Lila and Beau to overcome their differences and find their fugitive brothers. But could a journey destined for disaster help these polar opposites fall in love...all over again?" 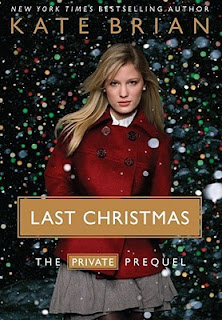 From Goodreads: "Ariana Osgood has everything an Easton Academy girl could want: straight A's, the perfect boyfriend, and a coveted spot in exclusive Billings House. But on the first night of Christmas vacation, a blizzard traps her on campus with irresistible bad-boy Thomas Pearson. Alone. Instead of snuggling with her boyfriend next to a cozy fire in Vermont, she's huddling for warmth with Thomas in Ketlar House.
As the snow transforms Easton into a winter wonderland, Ariana finds herself falling for Thomas. But someone is watching their clandestine romance unfold, someone intent on turning their holiday weekend into a nightmare...

Last Christmas reveals the secret of what really happened before Private began -- and the shocking truth will change everything for fans of Kate Brian's bestselling series." 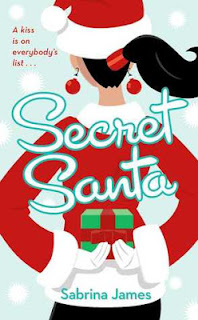 From Goodreads: "A tale of love, romance, confusion, and Christmas perfectly timed for the holiday season.

Noelle, a hopeless romantic, just knows that her gifts have to be from her senior crush! And geeky Froggy thinks the game is the perfect way to get super-popular Celia to fall for him...except she thinks his gifts are from Jake, the school's resident bad boy, and starts to crush on him! Romantic mishaps abound, but all is revealed the night of the Winter Dance, where there's more than one surprise waiting under the mistletoe!" 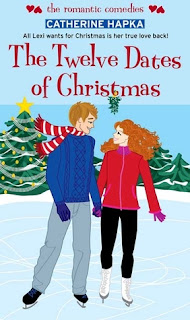 The Twelve Dates of Christmas
by Catherine Hapka

From Goodreads: "Lexi's feeling a little holidazed this winter....
Lexi's been going out with Cameron for way too long. Sure, he's a nice guy, but there's a spark missing between them. So she comes up with the perfect plan: get him to fall for another girl so she'll be free -- and guilt-free, too.

But when Lexi sees Cameron looking awfully cozy with Jaylene, her heart melts, especially when her budding psychologist best friend tells her that once a new couple has gone out a dozen times, their relationship is pretty much set. Cameron's twelfth date with Jaylene -- the Christmas Ball -- is coming up. Can Lexi find a way to rekindle her relationship with Cameron in the (saint) nick of time?

I agree. Cheesy holiday movies are great this year. There's seems to be a plethora of them!

Ooooh, thanks for pointing it out Em! Gonna check it out. :-)