Tip of the Day: Facing a long summer with the kids? Start out by making a list of everything you want to do and post it on the fridge. Then when the "we're bored!!" stuff starts you'll have a place to look for ideas. Our list includes things like library reading club, walk to park, draw outside with chalk, swim at grandmas and so on. 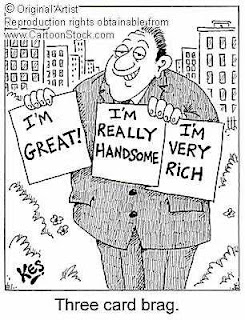 I think there's a fine line between sharing exciting news and bragging and it's really hard to see where that is sometimes. With Facebook and Twitter everyone is sharing everything these days. Celebrities, authors, neighbors. Everyone's business is out there. And sometimes it almost seems like a competition. Like a, look what I'm doing! Top that! My husband calls it shouting from the mountain top. He says everyone wants to be heard and know they matter. But when is it too much?
I heard Oprah say, well somewhere I can't recall, that people cheered for her on the way up. That while she was gaining popularity everyone was rooting for her. But then you hit a point and people want to take you down or see you fall. I think this happens with authors too. I know when I see newer authors talking about their exciting milestones online I'm excited for them. The sale, first cover, first review, first list they make. But then as the authors are around longer and talk more and more it seems there's a point where they should, I don't know. Slow it down a bit? I'm not even sure the right way to phrase it but when it's like yay, I just sold my tenth movie and my book is in 100 different languages and look at that, my book's in it's 95th printing, it starts to sound braggy and becomes a turn off. And then I don't want to really follow that author's news anymore because it just seems like all bragging. I guess that's why Facebook makes the HIDE button. :-)
I do get that people are excited. Totally. It's kind of like when you have kids. I try hard not to talk about mine too much online because while I think they're amazing and their every thought is brilliant, haha, I don't think everyone else will. There's stuff you just save and tell your spouse or mom because they too see the genius in your kids. :-) With sharing online there's definitely a fine line where it just gets too much. And it's not just authors I'm talking about. Seriously, a neighbor or old high school friend can get equally annoying in their facebook or twitter updates. A FB friend was posting about all the complicated organic only recipes she was feeding her kids. Climbing to the top of a huge cliff to reach a rare berry grown in only one spot in the world to dice into the kid's salad type of stuff. At first it's like wow, cool! Ten times later it's like okay, we get it, you're the best mom ever and we all suck a thousand times over and could never reach your motherly greatness. HIDE! :-)
What do you guys think? Where's the line between sharing news and bragging?
Kristina, Miss Author in Action
Posted by Kristina Springer at 5:00 AM

This is so true. The TONE of the mountaintop shouts makes a difference as well.

I think Twitter and Facebook are too character limiting: you can't get the background. I'd like to hear "I'm excited about my tenth book sale because this was actually the first book I ever wrote and it got rejected 80 times and my agent did something very special on my behalf and it has my mother in it and I cried when I wrote it because I miss her so much." Instead of a story, we get 24-hour news channel scrawls. And they're not very interesting.

Hmm, I don't have any super mom friends. Wonder why that is?

One thing I've learned: everyone draws the line in a different place. Some things that don't bother me at all drive other people crazy.

For me, it's mostly the mix of news and other content that I look for. If a blog is nothing but "here are my reviews, my appearances, my sales, my awards," it won't hold my interest for long. But when I've gotten to "know" someone online because they're talking about other things, then I do like to hear about their successes--and to know when I can get their next book!