Tip of the Day: Don't finish a three-year old's glass of milk. Really. Trust me on this. You could end up with a mouthful of milky peas and carrots.

Last weekend I attended the Sixth Annual Children’s Literature Breakfast hosted by Anderson’s Bookshops and WOW—I had no idea it was such a huge and cool event. First, there were like 600 people there. Authors, librarians, teachers, reading specialists etc. It was an amazing sight. And while I was a bit nervous going by myself to the event that went away within seconds. People were so friendly and fun and I found myself gabbing away with everyone like we were BFFs within minutes of getting there.

There was a HUGE bookstore set up and people were buying like crazy! Me too. I was pretty bad. But they were giving a 20% discount so I made it okay in my mind to splurge. Ann Martin was supposed to be there as one of the big speakers but got snowed in so I was pretty bummed about that. Especially since I bought a couple of her books to get signed. But the rest of the breakfast made up for it.

Here were some of the highlights:

Granted, I never heard of them before that day but apparently they are a big deal. They are these adorable 9 and 11-year old sisters that have been doing cooking shows online and now have a cook book. They did a cooking demonstration for us. 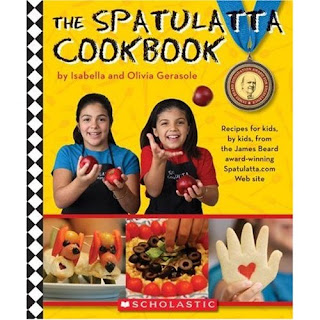 He’s the super popular children’s author that does all of those cute mouse books like this one:

And he also has YA books. I haven’t read any yet but I picked up this one:

He read from his YA books and gave a nice talk. He’s the tiny spec at the podium in the picture (you can see how packed the place was!) 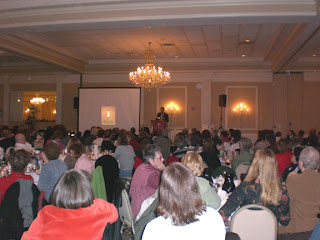 I don’t know how I did not know who he was before the breakfast because he was pretty freaking cool! He’s written 30 books for middle grade and young adult kids and he gives one heck of a speech. He was absolutely fantastic! He had one great one-liner after another—one of my favs: "Being a writer is like being a greeter at Wal-Mart––there are no benefits, but you never have to retire." Here’s a pic of him signing books: 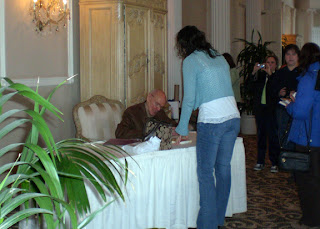 There was an Illinois author stationed at each table and every half an hour or so there would be a switch and a new author would come to the table. What a cool idea! I totally want to do this one day. I met a number of cool authors but one of the coolest was Brenda Ferber—another FSG author! I probably drove her nuts picking her brain about FSG (they are my publisher too) but she didn’t seem to mind. And she had a cool getting published story. She sold her Middle Grade novel to the very first place she queried (FSG). Then sold her second to the same publisher. When she wrote a children’s book she decided it was time to get an agent and e-queried one agent (and a REALLY good one at that) and that agent offered her representation that afternoon. AMAZING isn’t it? She makes the whole thing look like a snap. During one of the switches we were missing our author and my table said “you do the author talk!” You know I was like, “Oh no I couldn't…ok!” :-) And then I blabbed away about getting published. I figured it was good practice for the future.

Free stuff is SO fun! Each seat had a Kevin Henkes designed canvas bag full of things like posters, CDs, buttons, fans and even a spatula (from the Spatulatta Sisters of course). My favorite items from the bags? The little sample books! OMG!! Especially the Meg Cabot one, Allie Finkle’s Rules for Girls, Moving Day. It even came with sheets of stickers. Please let me some day be fabulous enough to have pretty colorful sample books to give away!

So as you can see, I had a pretty great time and I learned SO much from all of the great authors! Granted I don’t get out much in the way of writerly things (this being my second writing-related outing) but I totally want to go again next year. If anyone is in the Chicago-land area we’ll have to meet up and go next February!

Posted by Kristina Springer at 6:33 AM

Email ThisBlogThis!Share to TwitterShare to FacebookShare to Pinterest
Labels: Conferences

Looks like tons of fun. Loved the Wal-mart quote from Richard Peck.

Oooo how cool! I LOVE Kevin Henkes, and I'll have to check out his YA.

Wow, that sounds like a great time! I'm glad you blogged about this, I was really curious how it went.

This sounds so cool! I'm so glad you had a good time -- and got to hear RP and his great quote -- AND got free swag! Woo hoo!

I'm glad you went! I had to miss it this year, but we'll go together next year, yes? :)

Hey Kristina! It was great meeting you at Anderson's Breakfast. I love getting to know other FSG authors. I can't wait to read your book! Your description of my publication process sounds too good to be true. And it is, kind of. Don't forget I got about 130 rejection letters on picture book manuscripts before I sold my first novel. So I'm no stranger to rejection!!! (Still, I realize selling a novel to FSG and snagging an agent the way I did was pretty lucky!)