Interview with APRIL HENRY, Mystery/Thriller Author Goddess (or Why It's Not Shocking That SHOCK POINT Rocks!)

Tip of the Day: For a flurry of writing news and wisdom, check out April Henry's blog!

Good morning, and thank you for joining A2A for today's special Interview Edition! April Henry has graciously agreed to be featured on our blog and answered five random writing questions from the A2A Misses. But those who know me know I can't just pass the mic without saying a few words of my own first.

I love thrillers, and I love YA, so I LOVED April's first YA novel, SHOCK POINT.

Sixteen-year-old Cassie discovered that her step-father is using a dangerous experimental drug on his patients, so he sends Cassie to Peaceful Cove, an abusive boot camp for disturbed youth in Mexico. Cassie must break free of the camp, get home, and reveal her step-father for who he really is.

Who can resist a plot like that??? And it's totally believeable when April writes it. So read it! Besides, April is making it big on the writing scene. She has 6 books out, and a new YA and new adult book coming out in 2009. Don't miss out!

April also has a lovely author photo, is a runner, a wife, a mother, an Oregonian, and a book lover. Here she is.

A2A: Where do you do your writing?
AH: I do nearly all my writing on my little three-year oldlaptop. But where we go varies: a quiet room at the library, a couch at my gym [your gym has a couch? Jealous!], my couch at home, and the occasional coffee shop. I've found it's much better if I leave home to write - there aren't any dishes to be done or floors to be vacuumed (although sometimes there is food, which is bad).

[Here's a kind of fuzzy pic of April and her laptop.] 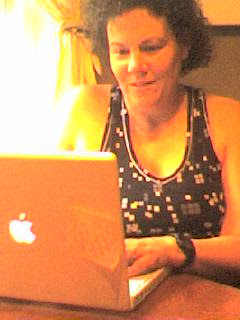 A2A: Are you a Plotter or a Plunger (not the toilet-unjamming kind!)?
AH: As a mystery writer, it saves you a lot of time if you know from the beginning who the bad guy is, so that requires at least a little bit of plotting, even if you never write it down. With a thriller, it's not so important to know things in advance, although of course you know your main character won't die (but will come close).
I have written books based on 20-page outlines and written them chapter by chapter, just seeing what happens. When I've sold books on sample chapters and an outline, then of course I've had the outline to follow.
In some ways, you don't limit yourself as much if you just plunge in. But even if I've plotted something out, I try to be open to interesting developments that I think of later on.

A2A: How do you handle discouragement?
AH: The most discouraging thing is to work on a book for a year and not have it sell. [Ouch!] That's happened a couple of times to me, even after I had published several books. One book completely mis-timed the chick-lit market, and the other didn't fit into any category. A "tweener," as my agent calls it, can be a hard sell.
Usually by the time I figure out something isn't going to sell, I've fallen in love with my next project, so that helps. And I've been around enough to know that even successful authors have their ups and downs. Janet Evanovich was once a washed up romance writer. I watched Charlaine Harris have two series fall apart underneath her, then she wrote something she loved that wasn't like anything else out there and started showing up on best-seller lists. [This is great perspective for all of us!]
If all else fails, I call my mom and let her tell me that of course I'm going to be successful. (She really believes it, which helps.)

A2A: What are you working on next?
AH: That's a big question. In the next few weeks, I've got to look at the galleys for Torched, my next YA. [Yay!] Together with my adult co-author, Lis Wiehl, I need to work on the editorial letter for the first in our Faith & Consequences series as well as start writing the second book.
I'm hoping I just sold another YA thriller, [We are hoping, too!] so I'll need to work with that editor. And I just finished revised something completely different- a humorous middle-grade - that I hope my agent will like too. Oh, and I want to write a futuristic-type book, and a book about a girl who discovers her little sister isn't really dead... well, you get the idea. I'm busy.

A2A: What are you favorite things about writing?
AH: I love thinking of new twists. Occasionally, I will have a couple of hours that are so filled with joy that it's like an out-of-body experience. But that doesn't happen that often.
Writing to me is like quilting, and there comes a point when I have all these scraps and I keep sewing them together and then suddenly I see the pattern. I like that.
I also like having written.

Thanks so much to April for her generous answers, and to our A2A readers who so need to check out SHOCK POINT and April's upcoming work!

Look for more YA author interviews in the next couple weeks of A2A!

Great interview!! I haven't read any of April's books yet but I'll have to check them out. And I do love what she said about some authors having failed series and then having a bestseller-- that is great! It always seemed to me like either they were a bestseller out of the door or not. I'm glad that isn't the way things are.

Thanks for sharing, April! (And Deena!) And April, My Apple PB is 5 years old--I'm ready for a new one only because the internal battery is dying (Can I have a tiny violin, please?)

I do wonder how to deal with that inevitable, painful reality that not everything I write will sell. Like April, by the time I realized my first YA wasn't going to find a home...at least not until another solid revision...I had fallen in love with my next project. But do you fight that desperate, grinding need to have anything you've spend a year or more writing sell? It must be that perfectionist side of me. Nothing left half-done...

This interview was great to read. Even though I do not write for YA, some of the comments she made work across the board.

Thanks so much for the interview, April and Deena! I can't wait to check out April's website.

April, wonderful interview!!! I haven't read any of your books, yet either. But can't wait to check them out.

Shock Point is great! My teen daughter and I each read it in a day or two. Very hard to put down!

You must be sexually excited for Generic Viagra to work. If you take Generic Viagra UK and are not sexually stimulated, you will not get an erection. Generic blue pill is not a hormone. It is also not an hrodisiac. It's a prescription medicine that gives men with ED harder erections so they can enjoy a better sex life.