Tip of the Day: Check out YA author Lauren Barnholdt’s cool book trick vlog. She shows everyone how to figure out what printing your book is in. I had no idea how this was done—pretty cool!

Approximately once a week my husband and I get into a debate—he from a reader’s point of view and me from a writer’s point of view. (Some background--I’m not sure if I’ve mentioned this in previous blogs but my husband listens to an insane amount of audiobooks on his iPod-- 300+ books last year.) Anyway, here’s the debate and I want you guys to weigh in.

Yup—that’s it. Now I understand ghost writers are necessary for all of the Hollywood memoirs etc. because it’s just so obvious that none (ok, I'll be fair and say almost none in case there is one or two who do write their own) of these celebs are going to write their own books. I’m not going to begin to believe that Dr. Phil is writing a dozen books a year while working all day on his TV show or that Miley Cyrus is about to jam out her memoir on the tour bus in between concerts. In fact, I had a good laugh when watching Oprah and seeing a particular celebrity not have a clue as to what Oprah was referencing in this celeb’s own book. Not only did she not write it I don’t think she ever read it.

No, here’s my problem. I don’t like when people put their names all over a fiction book and someone else wrote it. It really, really bothers me.

For example, about a year ago I came to a horrible realization. The teen fiction series I grew up on, the one I read like 100 books of, Sweet Valley High, was NOT written by Francine Pascal. Nope. This is true. And I’m sorry if you didn’t know and I just ruined your day. Yeah, ok, so Francine never claimed that she “wrote” the books. They say “created by Francine Pascal” on each cover. But hey, I was 12 when I read them. And I didn’t over think this kind of stuff. I mean, look at the covers. 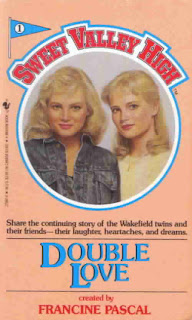 Her name is the only one that appears! I thought she wrote the books herself. This was someone I admired and thought it might be fun to one day write books just like her. Ha! I don’t know why exactly I’m so bitter about this but I am.

And more recently, James Patterson. His name is written in enormous letters across the top of books and he is getting the credit but someone else is writing the book. Oh sure, if you look closely you’ll see who really wrote the book. But how many people are looking closely at each book? How many people just pick up a James Patterson book and go on their merry way?

So back to me and my dear hubby’s debate. He thinks it is just fine that authors have other people write their books because they provide an outline to the book. Outline shmoutline I don’t think it’s the same. I can give someone an outline to one of my books and I don’t think the end product will be nearly the same. Not that it would be worse or better. It would just be different. It’s still not ME writing the book. If Lauren Myracle gave me an outline to one of her books I could manage something but it would NOT be a Lauren Myracle book. And I think that would tick off Lauren Myracle fans don’t you? My husband says an outline is all you need—he doesn’t think it matters who wrote it as long as the idea came from the big name author. And he is always referencing how Robert Heinlein books are continued after he has died just because other people write them and how wonderful this is.

I still don’t agree. What do you think? Am I just overly sensitive because I’m a writer? Do readers who are not writers not care if a book says JAMES PATTERSON across the top but is written by Bob Smith?

Posted by Kristina Springer at 4:42 AM

This is a tough one, because I agree with you both. I don't think readers care at all who writes the book. They just want a good read. And if they like one "James Patterson" book, they might like another one, even if the writer is a different person. Same with series books, which are hardly ever written by the same person.

However, I agree with you, that an outline does not equate a book. My any means. Heck, my own outlines turn out nothing like my books once I start writing. There's just so much involved in actual writing that dictates how the story will go.

I should add that I'm with you. I think the person writing the book should get the credit. But I understand book marketing is sometimes sneaky and the average person doesn't care. I think writers care more, because we couldn't possibly see putting so much work into a book and not getting credit (well, maybe not all authors, obviously).

Why can't both the writer and the creator of the idea have their names on the books? Like "Francine Pascal with Jane Doe"? Bc if it's a series, I don't care who wrote it; I either like the SERIES or not. Interesting discussion, but yeah, at this point in my writing life, I can't imagine NOT wanting my name on MY book. :)

I understand your betrayal about Francine Pascal. I felt the same way when I found out V.C. Andrews was really dead. At first I was like OMG she's writing from the grave!! Then I assumed that she had a treasure trove of unpublished manuscripts stashed away before her death.

Then I looked real close at the cover and found out "V.C. Andrews" is a registered trademark. What a moment of teen disillusionment. Why, heartless capitalist society, why?

Oh Kate- I forgot about VC Andrews! That's right. Grrr-- this stuff makes me so mad. I can't help it. And I don't mind the series thing I guess-- if other writers are writing a series (like the Gossip Girls author doesn't actually write the books either I think-- I think it's just her name used too). But if you are a devoted James Patterson fan and you pay your $20 you should get a James Patterson book. Not something written by someone else.

Tina, But I think with Patterson's books it's pretty clear there's another writer. I haven't seen one without the co-writer on the front page (granted in smaller type than Patterson's name). And like all the Gossip Girl books and series books, it says "created by."

True-- JP's at least have the other writer's name on them-- but his name is enormous (even bigger than the title some times) and the person who actually wrote the book has a teeny tiny name on the cover. I still think the average person just sees his name and grabs. It wasn't until I was listening to a James Patterson audio book and thought-- huh--this is different-- that I even looked at the cover again and saw there was another name there too. And each commercial he does he talks about "his new book" or whatever but is it really his book? Hard to say. It's his idea. They are selling the JP brand. I read an interesting article that said JP was a big marketing person before he started to write so I wonder if that was the plan all along-- to become a brand.

Tina, yep Patterson was a big-time marketing person. I saw him on 60 minutes once when he talked about his books' successes. He said most of his success was due to his marketing background, and the way he understands what people want and then creates a book to incorporate that. I think that plays big-time into how they market his books and he's "branded" if you will. Yep, totally agree.