Tip of the Day: Tacking on to what Em’s TOD was (to go through old high school keepsakes) go through the notes your friends left you in your yearbook. My yearbooks tend to read like a laundry list of all the naughty and fun things my friends and I did that year.

Throughout high school my favorite hangout would change from school year to school year—depending on who I was friends with at the time or who could drive. Hangouts improved immensely when wheels were involved. But one of our best consistent hangouts was only visited during the summer and was oh so fun.

I grew up in a pretty small town with a small high school—our graduating class had 88 people. So by high school most people were pretty sick of each other (ok, well specifically we were tired of the boys. No one wanted to hang out with the same boys from kindergarten) and sought out friends in different towns. That brought me and my friends to neighboring Naperville. Naperville has a huge, beautiful downtown area with street after street of awesome stores, coffee shops, ice cream parlors etc. Amongst these stores is the famous Anderson’s Bookshop which gets like every rocking author there is in there to sign. Smack dab in the middle of downtown is the Naperville Riverwalk—a completely beautiful park with, yes a river running through it, and lots of trees and covered bridges, and flowers and fountains and brick paths etc. So cool to walk around whether you are 5 or 50. 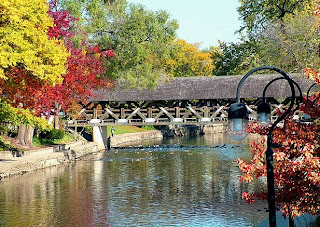 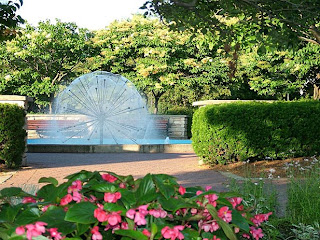 Well, off of the main drag was this super long brick wall, cleverly nicknamed “the wall”. THIS is where we would hang out EVERY NIGHT in the summer. Everybody did—kids from all different high schools would sit along the wall and talk for hours while watching people walk by or cruise by. Cruising was the other big thing to do in this area. Those with cars would drive in circles around the area just so they could see people and be seen. 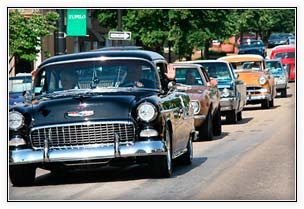 It became such a big deal to cruise through the Riverwalk that people would hold up scorecards and rate the people in the cars going by. Like 8.5, 9, 10. Other kids would bring their guitars and sit in the grass and play. Even years after I stopped hanging out at the wall my little brother would hang out there with his friends playing the two chords they knew on the guitar and making up songs. Somewhere along the way the cruising got so heavy that they had to put in place a cruising law—something like you couldn’t drive through more than three times in a night. I haven't hung out on the wall in years but I'm guessing teens still gather there on summer nights. It was the perfect place to spend hours at a time meeting new friends and chatting with old ones. Looking back, I wish I had that kind of free time now to just hang out with people every night. Definitely one of the highlights of being a teen.

Posted by Kristina Springer at 4:53 AM

Woah -- you were SO American Graffiti. Cruising laws? Hilarious! I don't have a Micky D's in any of my books...yet.

Tina, that looks so cool. There was nothing like that where I lived. But Long Island girls go to the beach all summer.

It reminds me of a Jane Austen book, though. The teen girls walked up and down the promenade in the London park, showing off their new dresses, while the guys showed off their new horses and carriages.

OMG, it sounds so fun! Can we all go this weekend? Please??