Sequels Talk (or it’s so hard to say good bye)

Tip of the Day: Make sure to get your author photo done early enough so that when your editor e-mails you for it you are prepared.

What’s your opinion on sequels and series? Love them or hate them? Is it like movies where the second one + is never as good as the first? For example, this past weekend ABC aired both Legally Blonde and the sequel Legally Blonde 2: Red, White, & Blonde. 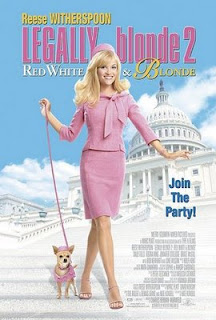 I was totally excited as I’d never seen the second one. But you know, it was pretty eh. Just eh. Yeah, Elle is still adorable and fun but the big huge problem of the movie was her trying to pass a bill to stop animal testing (called Bruiser’s bill after her Chihuahua Bruiser. There was a lab testing on dogs, one of which was Bruiser’s mom). I mean, I even have a dog and I was bored by this movie. It just didn’t do it as a follow-up for me. The first one was far better. That’s how I tend to feel about lots of movie sequels. But are books different?

I seem to have a hard time letting my characters go and have synopsis worked up for follow up books on all my books. It feels like I just get a hold of a main character and love him or her (well, I haven’t tried a him yet) so much that I won’t let her go. I haven’t written all of these sequels or anything, I just want to be prepared in case my editor ever comes to me and says MUST HAVE ANOTHER BOOK!

But then writing a follow-up book/series also makes me nervous. Look at the rockingly awesome YA author Stephanie Meyer and all the fans furious over her last book in the Twilight series. I haven’t read it and I’m not entirely sure why everyone is so upset but it seems she didn’t complete the series as they had hoped.

So what’s the verdict—do you like sequels and series? Do you write or plan to write a sequel or series?

Kristina, Miss Soon-to-Pub
Posted by Kristina Springer at 5:44 AM

I like sequels and series as long as there's a story there. If it's just an extention of the first story (like Legally Blonde 2, which is just more of "smart" Elle), then I'm not interested.

For example, Toy Story and Toy Story 2 are both fantastic movies, and the stories are completely different. They deal with different concepts, have different themes, and focus on different aspects of character development. Same with The City of Ember and The People of Sparks. Dairy Queen and The Off Season. Harry Potter. Little House on the Prairie. Even though the characters and (some) settings are the same, the stories in each book are new and different.

But if a sequel is just more of the same with a slight twist, I'm not interested. :)

Tabitha, I think you hit it! Star Wars and Indiana Jones are my fav series (non book) ever. I am reading the Step M books, in the middle of #4 right now, and I really like it!

I have never had the desire to write a sequel -- until super recently. More like a companion book where the same story is told from another character's point of view. Except it will end in a different place so it's not exactly the same. At least, that's my idea!

I'm all for sequels and series. And I also can picture a follow up book to almost everything I've written, because I can't resist thinking about what would happen to my characters after the book ends.

Not that I decide to read them all. I think one Sisterhood of the Travelling Pants was enough for me. But I like how a continuing story leaves more room for depth of character and storyworld development. I think that's why I never picked up Off Season. That world seemed fully explored in Dairy Queen.

Oooh, this has been on my mind too, Tina. I'm so glad you posted about this.

I do think teens LOVE sequels and series. At least that's what I'm hoping. Because (shhhhh) there's 70 pages plus a proposal for a sequel to a certain book on my agent's desk RIGHT now. I've had quite a few teens write to me and ask if there is going to be a second book about Ava.

I am kinda worried, though, because I took it in a completely different direction than one might expect. But I think, in a way, like Tabitha said, that's what readers want.

This is an interesting topic. I like sequels, and totally agree with Tabitha in that they need to have a completely different story to tell (with new conflict).

At the same time, I think you can get away with sequels more in books than movies. I tend to like less movie sequels, but almost always love book series. The ones that do it successfully, understand that series writing is a bit more like the pass of TV and has separate story lines for each book.

I love series and sequels--when they're done well. But don't get me started on Breaking Dawn. ;)

i love sequels and series books and movies! although at times the originals are hard to beat, i find that many times i end up liking the sequels better! like tlotr! the return of the king is def. my fav! and hp, the goblet of fire and the half blood prince are my favorites. but i do agree with jessica on Breaking Dawn.... let's not go there!

Deena, I haven't read the Step M books. I'll have to check them out, thanks for the tip! More books, yay!! :)

Kate, I was leery about The Off Season. I, too, thought that world had been well explored in Dairy Queen. But I wasn't disappointed. The Off Season has the same characters, but is a completely new story. And a good one at that. :)