Tip of the Day: want to take a break from writing this weekend? Especially if you had a busy Nov. by participating in NaNoWriMo or another writing challenge. If so, check out one of these original Christmas Movies. 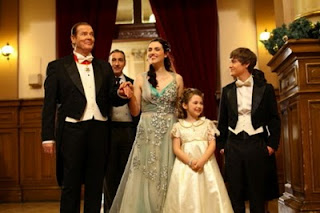 guardian to her young niece Maddie and nephew Milo. On top of balancing the daily hysteria of becoming an overnight parent, Jules was recently laid off at work, her car is on the fritz, and the kids’ shenanigans have caused a dozen nannies to flee. When an ominous knock on the door comes late one evening, Jules wonders, what now? At the door is Paisley Winterbottom (Miles Richardson), a proper English butler, with a curious invitation: a Christmas holiday with grandfather, Edward (Roger Moore), the Duke of Castlebury Hall, who was absent from the kids' lives, but wants to reconnect out of love for his late son. Jules initially wants to decline the trip, but her eventual acceptance makes for a magical Christmas season for everyone.

Out of work and permanently single in New York, Ashley (Kari Hawker) has an unsurprisingly cynical attitude to Christmas. But things perk up when her path crosses with charming journalist Will (K.C. Clyde) and her neighbour Nick (Bruce Davison) gives her a job that makes people happy. Yet while Nick would rather keep their good work a secret, ambitious Will sees it as a wonderful scoop. Cockle-warming seasonal fare.

For a list of other great holiday movies check out this blog!

--Emily, Miss Will Be Enjoying a Christmas Movie or Two this Weekend

Posted by Emily Marshall at 5:33 AM