Tip of the Day: There is still time to enter our Valentine Makeover contest. There are lots of cool prizes so check it out.

I haven't read a romance novel in years - at least not one that didn't contain some sort of paranormal or fantasy element to it. I'm your not-so-typical girl who loves movies where things blow up, zombies eat people, and love only happens because people are thrust together in insurmountable circumstances that get those hormones surging and the adrenaline racing. 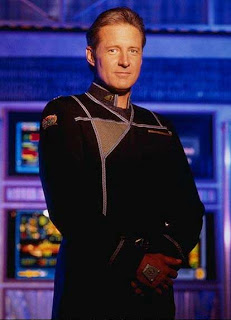 When I met my husband, we bonded over my love of the 80s movie Masters of the Universe (yes, the He-Man movie) and Babylon 5 (yes, I have an undying crush on Bruce Boxleitner, the captain of Babylon 5 and the star of Tron). To me, there's nothing hotter than a guy in uniform - one for space travel. My hubby couldn't believe it. He'd hit gold. Not only did I love typical guy movies (Die Hard happens to be one of my favorite Christmas flicks), but I was also an avid gamer (the video game variety, I've never played D&D).

Some girls might roll their eyes at me. That's okay. I was never one to fit in and gave up trying years ago. But here's the thing - I'm not alone in this world. There are dozens, thousands, possibly millions of girls out there like me who swoon over the fast, dangerous romance. In the medieval-based fantasy worlds I write, characters are often trapped in wars (magical or military). They fight hard. They love hard. There isn't time for a slow buildup because they just might get burned alive (read The Initiate) or magically pushed off a platform, sending them to a quick death by broken neck (read Sleepers).

When the bigger concerns of the world come knocking, it's usually love fast or die frustrated. lol 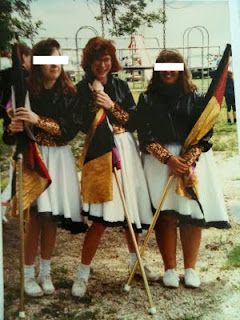 This was one of the reasons I decided to epub. Many of the agents I spoke with bemoaned my character's ability to fall in love (or in like, or in lust) so quickly. Instead of arguing about genre conventions (wouldn't you fall in love fast if you knew you could die at any moment?), I moved on. If I argued with every person who insisted I'd never be popular, I'd still be standing on the football field in high school, clutching my flag while wearing a marching band uniform, insisting that someday I'd make something of myself while my tormentors would still be, well, mean (thank you Taylor Swift!!!!). Maybe my books aren't typical YA fare. I admit it, they're a weird combination of Twilight and Game of Thrones. Personally, I don't see anything wrong with that.

Megg, Miss Enchanted ePubber
Posted by Megg Jensen at 6:07 AM

I can see where you're coming from and, as one of the people who has a pet peeve in general for characters falling in love quicker than Disney princesses, I get your point.

I've settled this in my own head by working out that there are different stages and sorts of being in love. You can be attracted to someone initially by their good looks or personality, and who knows you might sleep together in a night of reckless abandon (particularly if death is impending - live fast, die young!)

However, i do argue that it takes time and trauma together to build up a proper enduring love. Of course, if you're enduring more things together and relying on each other more, that love is likely to build up faster than if you're meeting once a week over coffee and poking each other over Facebook, so the time varies.

Megg, I had no idea we were such soulmates! Remember when Babylon 5 and Deep Space 9 were both running on TV? I had such a crush on the doctor on Deep Space 9.

I think in real life, people do fall in "love at first sight." It's a question for us writers of what people want to read. Many teens enjoy the slow burn of a budding romance, love triangles, 'shipping. The anticipation is the good stuff. And I'm sure just as many teens are like, "Forget the build up, get to the real good stuff." We need books for all readers.

There's also no coffee or Facebook in my books. They do, however, meet in a pub for mead and poke each other with swords. lol

Kate - I also loved DS9, though I must admit to loving Avery Brooks most. ;)

Ah, love triangles. I suppose they occur in my books, but to a far less degree than, say, Twilight. And you'd be surprised how many bad reviews I've gotten because people specifically say they hate love triangles.

I think the important part to remember is that from the MAIN CHARACTER'S POV, she is IN TOTAL LOVE!!! Does that mean she has a deep, soul-melting connection? Not necessarily, but from her pov, she LOVES the guy. And as long as we believe that SHE believes it, it works for me!