Tip of the Day: if you love baby videos, check out this fun one featuring roller skating babies!

Back in my youthful days when I spent my weekends at the roller rink, going backwards was "totally rad." Heck you were even still considered cool if you could move backwards using the awkward Figure 8 motion, instead of the more sophisticated method of whipping one foot behind the other. 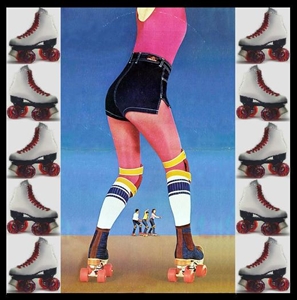 But now a days, going backwards is rarely a good thing. In fact on many occasions, when I feel like I'm slipping backwards it's incredibly frustrating.

Especially with writing. And even more specifically publishing.

There's nothing more annoying then feeling like you are making progress with your publishing goals, only to then have numerous set-backs and then all of a sudden you feel like you are worse off now then you were 2 years ago.

Recently, I've been subbing a middle grade novel that I love and my request rate is about 1000 percent less (give or take--my emotions might be outweighing actual math on this one) then it was on all my previous subs combined. Which is incredibly frustrating, especially when you know your writing has improved and that if people gave the book a chance they might just enjoy it.

But I honestly think that's the nature of today's publishing market. It's just so much tighter and so much more competitive that you really need to have something that sticks out.

While I love my concept and know after working in a library that it is exactly what the age group wants, at the same time, I understand the concept isn't huge enough for most publishers or even agents to want to take a risk on. Not that I'm giving up on my book. Far from it. Like I said, I know it has a market. And it only takes one person to believe it in.

Regardless, with so much change going on in the publishing world it's hard not to get swept up and feel like you are in a never ending circle and going no where. But the second you step back and pause and look at the big picture, you'll realize there's still tons of opportunities out there for writers now: such as ePubbing or smaller publishing companies that continually keep popping up.

It's just different. And if we take the time to rephrase our thoughts, we might find that we aren't stepping backwards, but maybe into something even better :) (Or that super cheesy comment could be the result of watching too much of the Voice this evening.)

Picture from here.
Posted by Emily Marshall at 5:16 PM

I know exactly what you mean Emily. It's definitely harder to get a read now, with the Big 6 cutting back on how many books they publish. But I expect you to keep sending out that query because someone will love it!

It must be a horrible feeling :p But keep pushing through, you'll get there :)

Hang in there! It's a tough tough road. And at the same time, I think it's a great idea to try epubbing one of your books along with continuing to query the MG series.

The weird thing is, often when I would be in such a place, and think, "Well, I guess I don't have what it takes after all," then I would get positive reinforcement out of left field. You just never know when a door is going to open. You walk down the hall hitting locked door after locked door and then one opens so suddenly you practically fall in.