Tip of the Day: the berry lemonade at Wendy's is delicious!
People say reality is stranger than fiction. Even so, fiction is much more fun to write!

As I've been writing fiction for longer and longer, it feels like it's starting to sink into my everyday life. Not only with the stories and characters themselves, but with how I write in general. 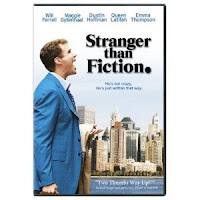 Working in public relations, I write many articles for the newspaper or a newsletter on a weekly basis, but more often than not now I just want to make up a quote that someone said; infuse a deep murder mystery into the most mundane of topics, like the color of the wallpaper chosen for the new library; or make all my stories take place in Europe-which would be much more exciting then writing about events at my library in Indiana, even though those are pretty cool too.

Being able to make up characters and general exaggerations of reality would make my articles much more exciting to read. Blog entries included.

I have a feeling this is why some people have resorted to using pen names: it feels much more freeing to not-be-yourself. I wouldn't feel bad if I assigned myself fake friends and went into detail about them on a blog entry: because I'm a "fake" author to begin with. I wouldn't feel like I'd have to be truthful about how I spent my day: because the person I’m pretending to be doesn’t even exist.

Do you think authors with pen names actually do this? Make up real life too?

Just curious, because I would wager that many snippets of information that celebrities put out into the universe is partially made up to fit their "persona." So I'm not sure if authors could get away with that too. Or even if readers would care.

Just something to ponder if you are considering having a pen name: it could be good for you on more than one level. It's either that, or the con artist book I’ve been revising right now is making me think of strange things. It's possible my character that enjoys changing her identify and personality every time she moves has been seeping into my mind so much that I'm starting to think it’s real and want my real life to reflect it.

Either way, I still think fiction is much more enjoyable to write, and I think I'd have a ton of fun if I decided to make up an author pen name with a completely unique life. And I'd imagine my readers would have more fun with it too. It's seemed to work for people like Lemony Snicket just fine.
Posted by Emily Marshall at 2:00 PM

Megg Jensen is a pen name. Sadly, I am as dull & odd in real life as the things I post on Facebook. ;)

Maybe my pen name should be the same as my "stripper name" (first pet's name + street you grew up on): Tiger Tallwood

Ha Megg. But everything is in the delivery. Humor can make the dullest of tasks seem exciting!

And Deena that is too funny. Sadly, I think I'd be either Licorice Notestine or Licorice Sunny Lane, depending on if I counted my first two years of life as "growing up" in or not.

Though to be honest Sunny Lane sounds kind of like a fun name.

However, Tiger Tallwood might fit for you if you decide to write more stricter fantasy books.

LOL. Hacker Maple is SO not a stripper name. It sounds like a tree disease. But you ladies have awesome stripper names.

Emily, if I spend too much time with my main characters, I start to act like them. I dread to think of how I'd act with a con artist main character. I'd be sorely tempted to make up stuff on Twitter at the very least.

I wouldn't mind if a blogger was just a pen name with an invented life--if it said somewhere on the blog that this was the blog of a fictitious person. Otherwise, I think people get a bit resentful at having their emotions stirred by what they think are real events and then finding out they're not. (Hence the strong reactions to the unmasking of certain memoirists who had taken creative license.)

Ha...Kate, that's not such a good name :) And I'm glad I'm not the only one that has issues with this.

Jennifer--that's a really good point. I guess on some level blog writing could be similar to a memoir. And there are very successful blogs that are written from a character's point of view and everyone knows its a fake person. Plus, I do think eventually people would pick up that it's fiction and no real life.

I still think it would be fun to have a bit of creative license, especially if people in your real life didn't know your pen name. Then you wouldn't feel obligated not to speak up on some incredibly funny stories that happen to others or even yourself, since you don't have to see anyone actually reading the blog.