Outlining Madness #2: Is This Plot Any Good?

So, I've been outlining plots and I keep wondering: do I have this down right? Because I have a habit of outlining important plot points with one sentence. In my last novel, my main character has to find her boyfriend, who is guarding a high security facility. So my outline says something like "She finds boyfriend, has him sneak her into facility." But then I started writing and realized that there was no way in hell she'd ever get her boyfriend alone. He's a 17-year-old security guard. He's outside of a heavily guarded factory. He can't follow a distraction and go off alone. He at least has to have a partner. So my main character couldn't get in the facility without interacting with the partner. Now I had a new character and had to rewrite the last 2/3 of my novel because I didn't think through that one sentence.

So after you write your outline, study it. 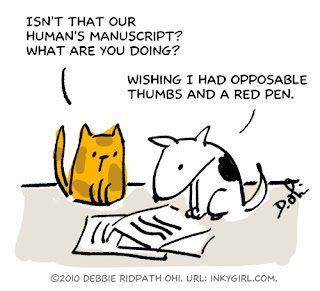 Do have any huge, multi-chapter events summarized in one sentence, such as "they escape"? I'm outlining by scene now, and I realize that what I now think is one scene may end up being two scenes. But I need to look for those red flags where I may have to hammer out more logistics or I'll end up with six scenes.

Is there always adhesive for the main characters in every scene? James Scott Bell uses this term in his popular craft book Plot and Structure. Basically, you should never have a point where any of your main characters could simply walk away and be okay. They have to be stuck to the plot: have so much at stake that they can't change their minds and leave the book.

Make sure reactions are realistic. Once something big happens, make sure you've left room for your main character to react. Big events should change your main character's direction. When she has a huge setback, don't start the next scene as if nothing's happened.

Think about how you can increase the tension between characters. Your characters should not be getting along. Best friends, family, lovers ... put them at each other's throats. Don't rely on your main character starting arguments because she doesn't know what's really going on, though. I like to think of ways the person the main character thinks she needs the most will turn against her. I may not use it, but it's a great exercise in torturing your characters. If you have a character who only exists for moral support, get rid of him or her (or change him to create more tension).

So I think I might list out my characters and write a note about how each of them is making life worse for my main character. This will give me lots of great plot ideas.

Here's a great tip from Rhonda Helms's plotting class: Resolve your subplot before you resolve the main plot. Don't try to wrap them both up at once, and especially don't outline this by writing something like "last chapter: tie up all loose ends." Decide how to resolve each subplot and where, and resolve the main conflict last.

Any other ideas to solidify your outlined plots?

Wonderful tips, Kate! I especially like what you said about characters having "so much at stake that they can't change their minds and leave the book". Sometimes I feel like my characters would like to leave and be part of a different story.