Tip of the Day: If you go on a summer outing to the beach, horseback riding, or berry picking, put your characters in your new setting. What would they like, dislike, find surprising?

My summer vacation in the Adirondacks was a great time to think about setting.

We drove 2000 miles above sea level to the Barton Garnet Mine. I don’t think there’s anyplace like this in the world. Garnet mining is unique because garnets are so hard. They’re used industrially for cutting and polishing. You couldn’t go to the mine and steal a big chunk of garnet because you couldn’t cut it out of the granite. It’s so hard, they cut it out with other garnets. As we chugged over the gravel road on top of the mountain, we could see the old houses that stood sentry over the 150 year old mine pit. I imagined what it would be like decades ago in the Upstate New York winters. You wouldn’t want to be caretaker here, trapped up the mountain. There’s no way they could mine here in the winter. You’d be all alone until spring.

Wow, that would be a great story, except Stephen King wrote it about a ski resort and called it The Shining.

OK, how is the garnet mine different from the Overlook Hotel? Well, it’s a giant pit, for one thing. Actually, it’s a few giant pits carved out of a mountain. The pit we visited hasn’t been mined since the 1980’s. Now it’s beautiful. Nature has reclaimed it. We heard frogs glooping and watched sausage-sized polliwogs swim. The ground was littered with thousands of sparkling red garnet pieces. 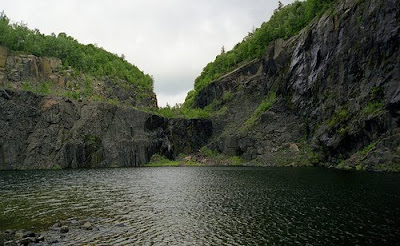 We had a tour guide on our visit. Tour guides are invaluable. I’m one of those people who asks the tour guide too many questions. Without meaning to, I’ve taught my kids to do the same thing, so now my children are the annoying ones who pester tour guides. Well, at least they don’t hang out behind the crowd wearing black in the summer and cultivating contemptuous looks.

If I’m going to write a story about this setting, though, I need some facts. Having grown up outside of NYC, the facts I need are wildlife facts. I can’t tell a tree from another tree or a bird from another bird. Up here in the mountains, I’m lucky if I can tell a bird from a gigantic fly.

Tour guide: You can see the garnets in the polished granite mined here. It will be used for the cornerstone of the new World Trade Center.
Me: Excuse me, what kinds of trees are those on the ridge of the pit?
Husband: Those are birch, honey.
Tour guide: You can buy a slab of polished granite in the gift shop.
Me: Excuse me, do you get bears around here? What about wolves, do you get wolves?
Kids [mine of course]: Do the bears eat people?
Tour guide: We don’t get many bears here. Mostly deer. We’re a little too far south for moose. They’re just north of here.

Oooh, now there’s an interesting fact. A starving moose, out of his territory, falls down the pit. Does the caretaker go down to save him? Or make him into mooseburgers? Maybe it’s the Great Depression, people are starving too. They’re still mining this pit but it’s winter so operations are shut down until March. Families live around here, though, just a few families whose fathers work at the mine …

With the right setting, a story practically writes itself.
-- Kate, Miss Apprentice Writer
Posted by Kate Fall at 5:00 AM

I think I feel a "fish out of water" story coming on. Great post about setting.

HA! What a great hubby you have.

A garnet mine is a GREAT setting!

LOL!!! I love this, Kate! What a cool and original setting and oh the dialogue...! Fabulous!

Wow - who knew garnet mining could be so interesting? I had no idea!!

:D I like to ask various peculiar questions as well. I booked my Bangkok guide from http://www.ourexplorer.com, and kinda of asking her a whole day, from Grand Palace to Thai girl marrying westerners, from local foods to flowers on the tree...