Tip of the Day: It's Teen Read Week! Stop by all week for our Interviewabration.

For Teen Read Week, we'll be interviewing authors whose books debut in 2009. We have some awesome books to look forward to reading. First up, I'm happy to introduce J.E. MacLeod, aka Janet Gurtler, whose novel Waiting to Score comes out in 2009.


15-year-old Zack Chase is a smart, talented hockey player who knows how to score on the ice. Hockey's in his blood. He's not so sure he wants to follow his late father's footsteps to become a professional hockey player. But Zack's Mom is determined he'll make it to the pros, no matter what.
When Zack and his Mom move to a new town, incidents on ice and off force Zack to dig deep to find out who he really is--and what he really wants. Is it Jane, the hockey hating Goth girl he's wildly intrigued with? Or an easier, sure thing?

I asked Janet five questions about her writing and herself:

You're part of the debut new fiction line with your publisher, WestSide. What's been the biggest benefit of being in the first catalogue at a publishing house?

Being picked to be part of the new line at Westside is so exciting. All the publicity and promotion about the new line will include mention of the launch books. Like mine! I loved seeing my book cover in Publisher’s Weekly and on Cynthia Leitch Smith’s awesome Cynsations blog. I hope we get even more exposure as our launch dates get closer!!

Our publishing house obviously has to put a lot of focus on the launch books. It’s in their best interest for us to do well!

Why do you use a pen name?

There are a couple of reasons why I use a pen name. The first is to protect my husband’s family. My married name is very unique and his Mom and Dad are both quite religious while my books are rather edgy. I don’t want to cause any upset feelings.

Second, MacLeod is my maiden name and since I got married late, I’m still pretty fond of it!! It was also (obviously) my last name when I was a teenager. And since I’m writing about teens it makes sense in a weird sort of way to use my “teenager name.”

The J.E. is supposed to be gender neutral or ambiguous. I write both boy and girl POV’s. Waiting to Score is a boy POV.

Did you play a sport as a teenager, like hockey? Were you a dedicated player?

I played sports, just not very well. I was kind of a klutz; well I guess I still am. And believe it or not girls didn’t really play hockey when I was a teen. I have two brothers though and they both played hockey, so I spent lots of time in hockey rinks. We even had a skating rink in our back yard one year. Truthfully I was more rebel teen than jock. I was busy being moody and dark and getting awful home perms.

Do you think you'll continue writing realistic YA fiction, or does one of your works in progress branch out into something completely different?

I absolutely love realistic YA fiction. I love the edge and the angst. I love a good YA that makes me think and feel and cry.

I have already written a couple of other gritty stories. Remnants of my wounded teenage soul? Or maybe just damage from all those perms?J

I do like to write other genres, too though. I started out writing romance, I’ve written children’s picture books and middle grade. Right now I’m writing a YA paranormal, kind of a Hero’s meets Alias plot. Very intricate and different from the way I usually write.

What do you plan to do the day your book comes out?

Wow! That’s a great question. I haven’t gone to that day in my mind yet. J I know I plan on having a launch party in my hometown, but that probably won’t be the exact day the book releases. So. Hmm. I know the fabulous Lisa and a few other YA authors made a vlog commemorating their day. Which is a great idea, but I don’t really know how to do a vlog. But I must do something special, right? 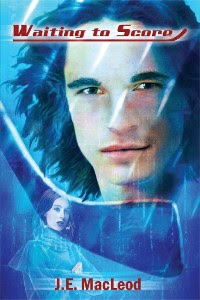 Okay. I’m making it official right now. On the day my book comes out I will go to Cheesecake Café and order a slice of their decadent chocolate cake. I don’t drink anymore so this is the edible equivalent to having a glass of champagne. Heck. I’ll even take my husband and my son with me and share!


I am so down with that cheesecake. Thanks for talking with me, Janet. Waiting To Score launches in February 2009 from Westside Books.

GREAT interview! I can't wait to read WAITING TO SCORE!! :)

mmmmm - chocolate cake! I think that's a great way to celebrate. Can we all come along? :)

Great Interview. Thanks for stopping by. And I agree with Lisa, I'd also like to come along on the celebration trip. Cake is yummie!

I love this website and if I could I'd send you all a piece of the cake. (It is awesome)

Great interview! I can't wait to read WAITING TO SCORE! And good questions Kate-- I've never thought about the whole what do you do the day it comes out thing.

The fashion industry and replica handbags designers give a fresh energy and a unique creativity to designer replica handbags ready-to-wear collections. A contemporary artist, whether designer bags is an architect, a photographer or a fashion designer, often produces unexpected creations. It is a bold challenge for designer handbags and I believe that only a handful of brands have been able to surpass the boundaries to this point between luxury and contemporary creation.