Tip of the Day: our very own Lisa Schroeder is giving away tons of awesome prizes (including a signed copy of her new book Far From You) on her blog.

After careful consideration I’ve decided there are two sides of the fence a person could belong on in regards to Holiday Gifts.

Fence Side 1: Those who think bad gifts exist

Fence Side 2: Those who think there’s no such thing as bad gifts

Maybe you think your Great-aunt Martha should belong on Fence Side 2, especially after the reindeer antler ear muffs she got you last year. 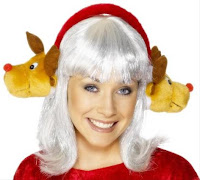 Dear Great-aunt Martha wouldn’t know a bad gift if it hit her over the head and lucky for you she has you on her gift buying list.

But if Great-aunt Martha doesn’t KNOW her gifts are bad, does it still make her gifts bad?

(Okay, that question is totally confusing, but think of it in the vein of “If a tree falls down in a forest, and no one is around to hear it, does it make a sound?”)

The answer to that question could also probably have people on opposite sides of the fence. But my answer would be: NO. For two reasons:

Reason 1 Great-aunt Martha Rocks: because she was thoughtful enough to buy you a present she thought you would like. And that rocks.

Reason 2 Great-aunt Martha Rocks: because even if you will NEVER be caught dead wearing reindeer antler ear muffs, I bet you will never forget the gift. And if you remember the gift ten years later and have a story to tell about it, then surely it was a memorable gift. Which of course means Great-aunt Martha rocks!

Now, personally, I don’t have a Great-aunt Martha and I’ve never received reindeer antler ear muffs (though, when I was younger I did have a pair of bear ones that I received as a holiday gift from my grandmother, which I loved to wear. But had I been a teen, I probably would have been mortified).

But I still think that there’s no such thing as a bad gift. Only ones that make you laugh more than others. Which is why I personally love the idea of White Elephant Gift parties. Where people raid Goodwill stores, garage sales, or their home for hideous items, and then wrap them up and give them away, or have a fun game to gift them.

And without cheesy, bad gifts you would never find such gems of presents as these that make you laugh:

If you look closely, you will find everything from a Polka vinyl record, another vinyl record that I am holding which had raccoons and bears on it (I really wish you could make it out in this picture---but trust me it was hideous), 80’s shirt clips, the ugliest barrettes ever made, and homemade snowman sweatshirts!!

Bonus Tip: Lisa’s book Far From You would make an excellent gift. White elephant or not. To switch it to a White Elephant gift you could design or buy a cheesy image book cover like these. That way not only would the person get a laugh opening it, but then they could take the cover off, see the awesome cover on the actual book and get a good book to read. In the words of my teen pal Miley Cyrus: It’s the Best of Both Worlds.

--Emily, Miss Awaiting an Agent
Posted by Emily Marshall at 6:15 AM

This reminds me of one of my high school friends who used to have a sweater party after Christmas. If you wanted to go, you had to wear a shirt you got for the holidays. Then we'd all decide whose was the ugliest.

We do the white elephant thing on Christmas Eve. It's great fun. We start with wrapped presents based on number draws, and then we can "trade" in reverse order number. It's pretty hysterical. There, is, however, always a reindeer plant stand with a broken leg that seems to make it into the mix every. year.