Tip of the Day: make sure to check out and possibly participate in Random Acts of Publicity (Sept. 4-7) to share the Book Love by promoting a friend's book! 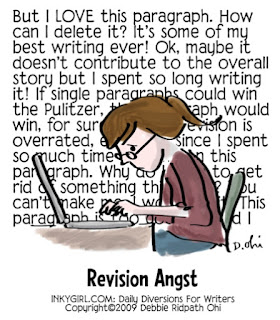 This comic pretty much sums up how I've been feeling lately. I have no idea how it happens, but every sentence that is my favorite usually ends up being the one that needs deleted. Seriously, it seems criminal it keeps happening. And not just to me. I know bunches of writers that say they always have to cut some of their favorite parts of the book because it doesn't add anything to the story or it's out of place.

In fact, I just listed to an interview with Ira Glass about his new documentary film "Sleepwalk With Me" and he mentioned that in several low-budget test screenings for the film that the parts the writers felt were the funniest were getting zero laughs from the audience.

So how could something we love so much, not resonate with the readers (or audience)?

In the case of Ira's story, he said switching how the lines were delivered--almost like flashbacks shown while the main character was driving in a car, instead of happening in real time--made the viewer connect with the lines more. So simply by doing a few re-shoots, all the funny parts got big laughs from the audience.

That's a bit easier to do in film: when writing, you can't exactly re-shoot. You can move around the words and try to place them in another paragraph or even another chapter. Then you can hope since some time has lapsed that the reader can laugh along with the character when referencing the previous scene. Sometimes this might work, but I've found every time I try to do that it doesn't work for me. Instead, I usually love my line so much that I still keep trying to place it in random spots throughout my manuscript. Until it gets to the point where I've revised every sentence around my one line while trying to make it work, that the line itself doesn't even make sense anymore. Then I try to fit my line of pure genius into another spot...where it fits in even less.

And you know what...the second I push delete is the second the story seems to fit together even better.

Such is the life of a writer...during Revision Angst.

This is really interesting. But I'm with you, I've never been able to recast most of my funny stuff into the right place anywhere. I have this one bit about Gilligan's Island not having sentry towers that I keep thinking belongs somewhere but it never does!

I'm glad I'm not alone Kate. It is annoying when you think you have a great idea, but can't get it to work the way you want...or readers don't connect with the joke.