And Also I'm Thankful for Turkey and Cranberry Sauce Sandwiches

Tip of the Day: Only 38 days until Christmas!

This week at Author2Author, we’re kicking off the holidays by blogging about what we’re thankful for in our writing lives. And, you know, it’s pretty easy to be thankful. I’m mostly thankful to be born in this time and place. I can work on a PC in the evenings and weekends, rather than using a sharpened quill or spending all my time foraging for food and wood. But all the people clogging the highways with me on my morning commute are also recipients of the gifts of living in a first world country in the 21st century. What makes me different from most of them? What makes me a writer and not a plumber or an accountant or an embezzler?

OK, perhaps I don’t have the education to make a good embezzler. But I think what drives me to be a writer, what makes me most thankful in my writing life, is that I was raised to have a wacky sense of humor. Nothing reminds me of this more than the holidays.

Like, we had this gorgeous old Nativity set that belonged to my grandmother and each piece was about a foot tall. We placed it under the tree every year. One of the wise men lost his head. So we used to balance the wise man’s head carefully on his shoulders and hide gifts behind him. When someone came to our house to celebrate, we’d ask him to hand us the gift we had tucked away. Naturally, the wise man’s head would fall off and my brothers and I would gasp and yell, “Oh, no, you killed the wise man!” This remained hysterically funny to us year after year. We called our Nativity people “the Wise Guys.” We also had assorted angel body parts hanging from the tree since we refused to get rid of broken ornaments, and there was much family laughter when we hung the disembodied heads on the tree.

I was very picky about the tinsel. We called that foil stuff you get at the dollar store “tinsel” and I despised clumps of it on the tree. “Separate the strands!” I’d tell my brothers every year. “Don’t just chuck it on there! No clumps!” The first year I attended college away from home, I drove home for the semester break at night. My brothers had tossed the Christmas lights into one big clump in the bushes to welcome me home. 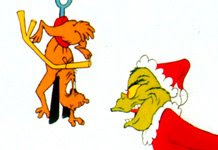 Every year when How the Grinch Stole Christmas came on, the whole family would gather around the TV and complete silence was mandatory. I don’t know what the penalty would be for breaking the silence because nobody did. I learned the genius of Boris Karloff, Chuck Jones, and of course Dr. Seuss from my father’s absolute worship of this Christmas special. He always laughed, every year. When I asked him why he still enjoyed it so much even though he was an adult, he said, “Kate, we’ll always be kids on the inside.”

I thought he meant everyone, and it took me a long time to realize that not everyone stays a kid on the inside. And I’m thankful that my parents thought it was OK for me to stay a kid on the inside. I’m thankful we had a house where we could laugh all the time, where it was funny that the ornaments were all broken and you could watch the Grinch for free on TV and it was the highlight of the year. I think I became a writer so I could keep that feeling of looking at the world and finding it remarkably, amazingly weird and funny. I hope I can share that feeling with readers someday.
-- Kate, Miss Apprentice Writer
Posted by Kate Fall at 4:00 AM

Kate, you definitely have a great sense of humor, as is evident from my lols just reading this post! What a great family! My dad LOVED the Grinch. I think he looked forward to it more than us kids every year!

Oh this post made me LAUGH! Do you still have that headless wise man? I love how you never got tired of the joke. :)

Tee-hee -- great memories. I giggled along the way. I also posted a link from my blog to this one for my readers to enjoy. Great post.

That's awesome, Kate! I laughed my butt off reading this! And I'm envious. We didn't have that kind of levity around our house. But I fought for every scrap of holiday fun, and I've managed to give it life in my own little family now. Hmmm...I think I feel my own post coming on. Thanks!

You're all so sweet! Thanks for sharing my memories.