My anti-science brain has been trying to complete lots of science experiments lately at work. I’ve been attempting to explode Diet Coke, crunching pop bottles, and making giant bubbles.

I’ve had more failed attempts than successes. Have you ever tried to blow up a balloon by immersing a bottle in hot water? Yeah…not that exciting. Maybe other people could succeed at this, which is why they published it in my Pop Bottle Science book, but I certainly couldn’t get it to do anything. This might have something to do with the fact I much preferred to talk to cute boys in high school Chemistry classes than actually pay attention (can you blame me?)
But despite all those failed attempts, I’ve also gotten some pretty cool results.

Take this for example, at the start of the day of trying to surround a kid in a bubble. 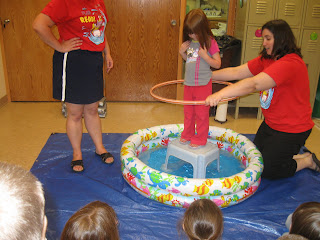 Well..not that exciting yet...
Then after lots of attempts and tons of suggestions from the “young scientists” of how to hold my hands and different techniques of dipping the hula hoop in the bubble mixture and we got this result. 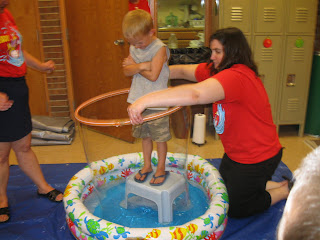 Much cooler...this experimenting thing might actually having something to it!
But it took about 100 tries and a lot of suggestions before getting the right combination. Which reminds me a lot of writing. Sometimes you never really know what’s going to happen with a book…until you experiment.

Sometimes experimenting with things like flipping chapters around, creating new characters, or changing the plot can seem overwhelming. And you never really know if what you are going to do is going to create any result, let alone a good one. But if you don’t take that leap of faith and begin to experiment more, you might never have cool results, like this, that are just…well, awesome. 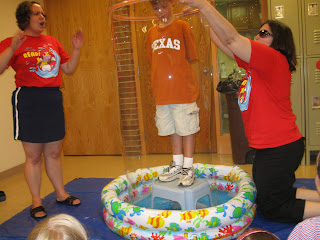 And who can’t help but get excited about a giant bubble! Or really, a book that you can't put down.

--Emily, Miss Querylicious
Posted by Emily Marshall at 8:24 AM

Ooh, that last bubble is truely awesome. You can tell by the look on the kids face that he is amazed to be in a bubble. For a moment, he was the Bubble Boy. So cool to experiment and everything seems to take a lot of work to see results in the end.

Omg, that is so cool that you got the bubble thing to work. Make a splash!!! :)