Interview with Eric Luper (or A Love Manifesto) 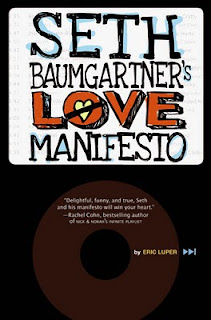 1. Congrats on the release of SETH BAUMGARTNER'S LOVE MANIFESTO! Lisa Schroeder has been singing its praises and I can't wait to get my hands on it. What was the spark for the idea of this novel? And is it as lol-funny as the blurb makes it sound?
The idea for this book struck me when I was 17 years old when a friend of mine asked me, “What would you do if you found out your father was cheating on your mother?” My first response was that I would blackmail him for a car and an increase on my allowance, but it’s a really tough question to answer. Knowing something like that undermines a lifetime of trust and your actions could seriously affect the future of your family. The idea stuck with me for many years and ‘pop!’ out came Seth and his Love Manifesto.

2. BUG BOY was one of my fave reads of 2009! It took place in such an interesting time and setting, one that I knew very little about, and you made it feel very real. In order to write such convincing jockey scenes, did you ever (a) wear a rubber suit to sweat out extra weight? (b) race a horse? (c) muck out a stall? If not, how did you research these events to write about them so convincingly?

I’ll answer your questions in order:

a) I never wore a rubber suit to sweat off weight but I did see how much weight I could drop in 48 hours with intense exercise and starvation/dehydration. I will admit that I did not last the full time, but I did manage to unhealthily shed 7 pounds.

b) I rode on the Thoroughbred race horse simulator at the National Museum of Racing in Saratoga. It was there that I developed a vast respect for what jockeys do. It’s really hard to stay perched on your toes in those irons with the horse galloping. You can see all about it here (along with the mineral baths and a few other research sites): http://eluper.livejournal.com/10913.html

c) I have never mucked out a stall. However, I have watched other people do it and I’m not envious of it.

3. I see you lived in Seneca Falls, NY, near my home of Rochester, NY. What were you doing in the Falls? Will any of your books take place in or around Rochester?

I lived in Seneca Falls when I was going to chiropractic school. In fact, I still am a practicing chiropractor when I’m not being a writer! So far, I have no plans to set a book in or around Rochester, but if you read BUG BOY closely, you’ll remember that Jack is originally from the Finger Lakes.

4. You are slated to speak at the 2010 Rutger's One-On-One Plus Conference in October -- very cool! Was your first novel sale, BIG SLICK (2007), a result of attending a Rutgers One-On-One Conference?

I’ve had a very strange relationship with the Rutgers 1-on-1 Conference. I submitted my first piece for critique, a chapter from Big Slick, but by the time the conference happened I had sold the book to Wes Adams at FSG. The same thing happened the next year when I sold Bug Boy. The third time I went, I spoke with a few editors about my first chapter of Seth Baumgartner’s Love Manifesto, but ultimately sold the novel elsewhere. However, I did connect with my agent, Linda Pratt of Sheldon Fogelman Agency, there and have met so many great people through my experiences at Rutgers. I highly recommend this conference.

5. What are you working on next? And after that?

Currently, I’m putting the finishing touches on a middle-grade humorous novel called Jeremy Bender vs. the Cupcake Cadets. It’s my first published middle-grade novel and I really love this one. It’s slated for release in Spring 2011 with Balzer + Bray (an imprint of HarperCollins).

Following that, it’s time to begin writing my fifth. I’m giving thought to writing a contemporary fantasy… something set in modern-day with links to ancient magic and mythology. Ironically, it’s the genre I started with back in 1999, but gave it up when I was having such trouble placing my novel. That one is still collecting dust on my hard drive. I plan to start from scratch and let that one be.

6. What book are you looking forward to reading this summer (that is written by an author you don't personally know)? Any other books that you've already read that you would recommend to A2A readers for summer reading?

I just got back from BEA so I have tons of books on my pile. But here are a few I’m really looking forward to:

The Candymakers by Wendy Mass

And a few that I’ve recently read that I would recommend:

Thanks so much for your time, Eric!