Tip of the Day: Fear of success for the win. J.K. Rowling admits to post-Harry Potter therapy. If someone expected me to write the next Harry Potter, I'd be in therapy too!

So this week my husband was hospitalized after being bit by a stray cat. All he did was try to feed a starving kitten. Result: 3 days in the hospital, minor surgery, and tons of IV antibiotics. I guess we dodged a rabies shot series. Usually, my teen daughter helps out with her little brother when I'm away from home (such as stuck in the emergency room trying to explain to doctors that my husband passed out because they didn't give him food for three days). However, she came down with bronchitis at the same time.

What am I doing about this one-two punch? Beating myself up for not getting any writing and critiquing done, of course! 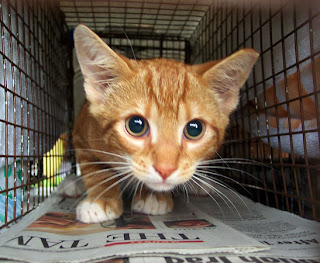 I'm so lazy! Another writer--let's face it, a real writer--would have started a new novel in the hospital. It's not enough to think that someday, some romantic lead needs to be bitten by a stray cat. I should have that outlined. I should have done something. This is what separates the successful from the slothful! After I got home from the hospital, dosed out the girl's antibiotics, walked the dog in the rain, washed the dishes, cooked dinner, did laundry, and visited the hospital again, there were two hours before I fell asleep I could have used for writing.

And what did I do when I got my husband home from the hospital? I watched Star Trek all day on Netflix with him. OK, that's sort of an example of studying good writing. But you know, not really. It's not like I did anything.

It's the work ethic, that's the point. Plus now I've been out of my story groove forever. I couldn't have spared 15 minutes? I am a terrible person.

I have a huge fear of sloth, a constant, nagging feeling that I'd be a real writer if I wasn't so lazy. That in the end, I prefer to do nothing rather than work, and it will be my downfall. Motivation has always been the hardest part of writing for me. I've got a pretty darn good excuse this week, but what about next week? What will be the excuse then?

Eventually I feel so bad about it that I have to do something. And then I think, Wow, I'm pretty awesome. Look at me, Miss Accomplishment. But that mean girl voice inside my head is always ready to say: It wasn't enough, lazy pants.

I'm only afraid of what I don't get done because I know life is short, and I have been going to too many funerals lately.

Writing isn't always fun, but I like to approach it with at least a seed of joy and anticipation. :)

I'm sorry about the funerals, Jenn. Tonight I got out of the house and went to yoga. Not writing, but necessary to make the most of life. I often need to remember that approaching writing with that seed of anticipation requires having health and energy.

Jenn, ick on the funerals, but I do know what you mean. I feel like I SHOULD use the time I have now to its fullest, bc I never know what tomorrow will bring. And that is when I will feel guilty for watching TV instead of writing.

It's all about balance. Sometimes you'll write and ignore your family. You'll probably feel guilty then too.

Sounds like you've had a horrible week and rest is actually what you need. Sometimes I honestly believe taking breaks is more important than writing. So give yourself a break and hope everything gets better!