I’d like to give a big thanks to Kristina Springer for asking me to come here and discuss the options available to authors in 2011.

My path started much as many authors have. I finished my first book, Into the Shadows, in the summer of 2008. I spent the rest of 2008 and most of 2009 querying that same book around to agents and editors. I joined SCBWI (Society of Childrens’ Writers and Illustrators), and joined three critique groups. I continued to write while I waited, sometimes minutes, sometimes months, for responses on my queries.

I had some very positive responses, requests for partial and full manuscripts (which my SCBWI friends were very impressed with) but ultimately I got a NO. 100 times. I even had some nice rejections…agents who liked the writing, or liked the story, but due to the economy were unable to take on new authors.

Oh well. On to the next. The book was thrown on the shelf to collect dust. I wrote another book and started working on shopping that around, even getting a full request from an agent that had requested a partial on my first book. Things looked positive, but ultimately she rejected it as well. I was in the process of researching and writing my third book (now fourth or maybe fifth book as it’s still a work-in-progress) when I came across a blog in the summer of 2010. I honestly don’t remember how I found it, but there I was at J.A. Konrath’sblog (http://jakonrath.blogspot.com), reading all about his ebook adventures.

I was shocked. I’d always thought self-publishing was for losers who couldn’t get a ‘real’ publishing deal. But here was a published author skipping his publisher and going straight to ebooks. And he was making a lot of money. A LOT of money. Now, I am, of course, a realist and thought, well, he’s been published before, he has a following, but because the money he was making would allow me to write full time, I certainly kept paying attention and following along. I read about every epubbed author I could, how they did it, what they were writing, using social media to talk to these people and just gathering all the information I could.

And after a lot of thought and consideration, I decided that I would try out this epublishing and see what the big deal was about. I figured—what did I have to lose?

I had a book collecting dust on the shelf and I figured if anything, I’d get some readers, get some experience, and maybe make a little money as well. I planned to still submit my second novel to agents, hoping it wouldn’t be a black spot on my name that I had *gasp*—self-published. I followed Konrath, using the same cover artist and formatter. I figure it’s best to copy the successful folks.

But something happened. The further I got into epublishing, the more I realized I loved it. And that maybe I didn’t want to query anymore.

And I’m not knocking people who are traditionally published, being published is fantastic, no matter how you do it, but I’m also happy there are more options now than there were when I first started querying. You can chose your own path, which is great. Some authors are even doing a combination of traditional and self-publishing, which is a great idea.

As for me, since November 1st,2010, I’ve sold over 400 copies of Into the Shadows, and sales have really increased, I’m now selling 100 or more copies a month. I expect them to continue to grow as word gets around and with the release of my second book, Bloody Little Secrets, later this spring. I’ve earned back the money I spent on the cover and the formatting and am now making profit. If I can sell at least 100 of each of my upcoming books (I hope to have a total of 4 titles of my own by the end of 2011), I will be making $800 a month off of ebooks, or $9600 a year. And that’s assuming I don’t write any more books, which I of course will! This is also assuming sales stay the same, however I believe they will continue to increase, so these numbers are modest.

In the meantime, I decided to band together with other like-minded authors, and with Megg Jensen (www.meggjensen.com) and G.P. Ching (http://genevieveching.blogspot.com) to create DarkSide Publishing (www.darksidepublishing.com). DarkSide is a publishing label, where indie authors work together to produce great ebooks. By April 4th, DarkSide will have 4 titles available, and by the summer of 2011, we should have 7-8 titles available.

Megg Jensen has also seen great results, just in the first month, turning a profit and cracking the top 100 in Teen Fiction Ebooks on Barnesandnoble.com. G.P. Ching hit bestseller category lists on Amazon within the first two days of her release. We have high hopes for new author Angela Carlie’s upcoming release. (http://angelacarlie.blogspot.com)

All in all, I think self-publishing has emerged as a viable option for authors looking to get their work in front of readers. Some epubbed authors have received book deals here in America and abroad, movie deals, gotten agents, and have really made a career for themselves.

I’m so happy with the decision I made and so excited for the future and I wish you the best of luck with your reading and writing endeavors. Be sure to try out an indie book the next time you have a chance!

Karly Kirkpatrick is the co-owner of DarkSide Publishing (www.darksidepublishing.com), an indieepublishing label and author of Into the Shadows, available now, and Bloody Little Secrets, coming soon. She writes about her Adventures in Epublishing on her blog, www.karlykirkpatrick.com. In addition to being a grad student in the Writing and Publishing program at DePaul University, Chicago, Karly is also a member of SCBWI, a high school German teacher, and mother of an almost-four-year old. 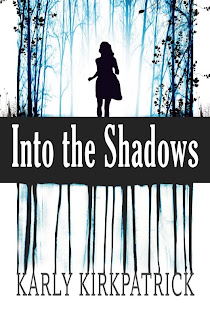 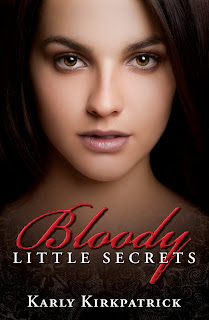 Posted by Kristina Springer at 5:56 AM

Kate - All of the cover info for DarkSide authors is on our blog at http://darksidepublishing.blogspot.com/p/our-cover-artists.html

I'm so happy to see indies getting the attention they deserve!

Thanks for stopping by everyone!

@Kate...thanks! I had some great cover artists working on these and Megg's link will give you their info.
If you have any more questions, be sure to drop me a line or check out my blog www.karlykirkpatrick.com. I run a whole Adventures in Epublishing blog post series where I post everything I've done so far!

very cool. I'll keep an eye on your label!

Oh cool, I'll be sure to check out the blogs!

I love these covers and they definitely make me want to read them! Now to get a Nook.... :) Thanks, Karly, for blogging with us and we wish you much much much continued success! I love the new options that us writers have for publishing.

Aw, thanks so much guys!