Tip of the Day: Friday is April Fools Day! I'm looking forward to playing tricks like Rodrick from Wimpy Kid, such as bringing frozen dinner to the table with pot holders, saying, "Be careful, don't burn yourself!" 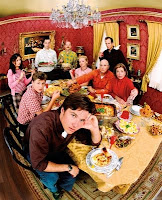 So my writing doesn't bear a lot of resemblance to my television watching, which is a good thing, trust me. I know, script writing is a great talent and resource. I'm glad that writers get inspired by television scripts. I like shows that are well-written, like Arrested Development. I've always wanted to write a novel with a large ensemble cast like that, but yeah, it just doesn't work out well. Maybe in a decade or so.
Mostly I watch cartoons. Futurama. The Simpsons. I like bright colors, and I love watching stuff happen that could never happen in "real life." That's sort of an inspiration.
Actually, when it comes to basic character conflict, you can't beat Spongebob Squarepants. It's like paint by numbers: 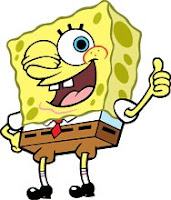 1. Start with a good-natured, likable main character.
2. Put him in a unique setting.
3. Put your main character in conflict with characters with opposite traits: pessimistic, greedy.
4. Make sure your conflicting characters are forced to be together (a job at the Krusty Krab works).
5. Up the stakes by giving your character someone or something to care about, like a pet or a best friend.
6. Keep the scenes moving fast and use snappy dialogue.
7. Your main character shouldn't be perfect, and his faults will cause him setbacks, but ...
8. In the end, we want your main character to have a satisfying life that he engineered himself.
-- Kate, Miss Perfecting the Pages
Posted by Kate Fall at 1:19 PM

OK, for real, you're right! Spongebob is the perfect model!

I will never look at Sponge Bob in quite the same way. And, I do believe, you've created a new plot method! ("The Sponge Bob Model.") Love it!