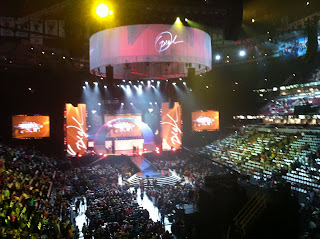 I guess I just expected there would be some big **SURPRISE** though. Like something that would knock Oprah's socks off. I mean, it's awesome to see so many celebs but Oprah spent her whole career seeing these people. She'd interviewed all of these guys like a dozen times a pop. So where's the surprise? I guess the surprise is that they are just all there at the same time? But they're all there each time there is an academy award or whatnot too. I guess the difference was that this was like a "this is year life Oprah! event". See all the kids you sent to school? All the books you made bestsellers? All the houses you gave away? The careers you launched (btw, Dr. Oz was so cute dancing). We were basically at Oprah's retirement party. Not that I'm complaining! I would go to any party of hers any time! It really was "spectacular" to see. I just wanted them to give her a really big surprise. But is Oprah just to big of a name that there is nothing left that would really surprise her?

My only real actual complaint? The whole night was really long. I mean reeeeeeally long. (we had to leave at 3:30 to get there by 5pm, they stalled with warm up people chatting and dancing and being goofy until 7:30, first show didn't end until 9:30pm and the second show started right away, then that didn't end until 11:30pm and we got back home by 12:30am). And they didn't even give us a bottle of water. For real. I tried to bring one in my pocket and they took it at the door. They said I could get in the line of a million people and buy a replacement bottle for $5 if I really wanted to. But then not to bring it to my seat. And they didn't want us eating. At all. Nothing during this time because it might be seen on camera. Which I'd understand except from where we were sitting we could see the people in the box seats that were having waiters bring them out food and drink and were chowing the entire time on camera anyway. And they didn't want us going to the bathroom. Which again, I get, empty seats and all that don't look good. But I have to say around 9:30 we took a chance and ran past the ushers to a bathroom anyway. I mean, I love Oprah and all but six hours with no drinks, food, and bathroom breaks is a little much.

BUT, it was mostly a really cool, once-in-a-lifetime experience and I'm glad I went! I think it airs next Monday and Tuesday so you can check it out if you're interested.

Posted by Kristina Springer at 6:27 AM

It sounds like the show itself was terrific but man, you must've been dying for food and something to wash it down with. And how the heck do they expect thousands of people not to have to go to the bathroom for six hours?

So who were you most excited to see there of all the people you named?

would have loved to have been there for that taping! Everyone expected that she would be giving away something incredible...but I heard the audience each got a tree planted in their name or something like that, I would have felt jipped, not gonna lie, lol.

Can't they just edit out footage of an empty seat so you can go pee? :-P But you had to go to this event definitely!

They did give her 25,000 trees but I don't remember them saying they were for the audience. We each had to buy a book to donate. I wanted to donate my own, lol, but they had a specific list. Highlights were Stedman finally talking/attending, seeing Maria Shriver (so not letting the sperminator bring her down), the finger lights during the Beyonce song (looked like a million stars), and seeing Maya Angelou and her reading her poem. Though she could read a grocery list and it would sound just as good, lol.

Sounds like tons of fun. Big surprises or not.